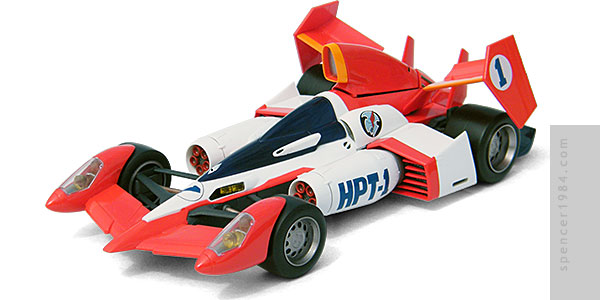 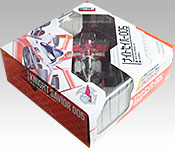 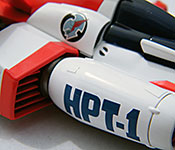 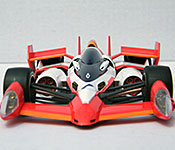 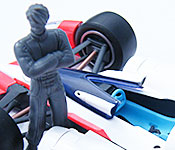 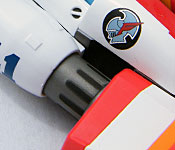 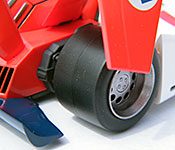 In the far-off future of 2015, artificially intelligent computers called "Cyber Systems" have been installed in Formula racers to help improve racers' abilities and reduce accidents on the track. Osamu Sugo is the long lost brother of Asuka Sugo, who left home prior to the series after an argument with their father about the use of these cyber systems. A successful F1 driver in England, he returned to the Cyber Formula circuit with team Union Savior under the pseudonym "Knight Shoemach" to keep an eye on Hayato Kazami and the Asurada.

The package is a square cardboaard box, approximately 10¾" (27cm) on a side and 4" (10cm) deep. The window is an irregular diagonal slash across the top and opposing end panels, with a large portrait of the Knight Savior and its logo on one side of the window and the name, stats, and "Variable Action" logo on the other. The text and photos are oriented in such a way that there is no "front." One of the side panels with the window continues the portrait of the car and repeats the logo and stats, while the other one has the series' logo, stats, and Mega House/Sunrise logos. These panels are white with red trim, while the other two panels are in a checkerboard two-tone red and have line art and full detail drawings of the Knight Savior under its name and stats. The bottom has multiple photographs of the model along with detailed views and descriptions of its features. It also has all of the legal and contact info. Inside, the car is sandwiched between two clear plastic trays and a printed background that mimics the starting grid of a race course (with painted numbers on the pavement). The trays are taped together, but nest so securely that the car and accessories can be repackaged easily. Strips of soft plastic protect the rear wings and scoop, and a thick foam sheet cut to the shape of the car is sandwiched between it and the base. The base is dark gray with the car name, driver, and number printed in white. The base, sheet, and car are keyed to each other, but not fastened together (a small screw is provided in a separate baggie for those that wish to do so). A solid gray figure of Knight Shoemach is in a separate depression in the lower tray, and is packed next to a base to help keep him standing.

The last couple releases in Mega House's Cyber Formula series have been "very good." But their Stealth Jaguar showed that they were capable of truly "great" work, and they once again achieved that peak here. The sculpting is sharp and beautifully detailed, with every vent, latch, panel line, and port sharply defined and perfectly aligned. Even possible casting artifacts like parting seams are so minute and so well incorporated into the design that I can't be certain they're not intentional design choices.

As with the other cars in the series, it is a mix of plastic and diecast. The body is plastic, with clear headlight coverss (all four - more on that in features/accessories), transparent yellow headlights and driving lights, and a dark transparent blue two-piece canopy. The paint is a mix of red and white, with orange trim and a dark blue rear diffuser. breaks are generally sharp and clean, with only a very slight ghosting under the driving lights. Black paint is used for the recessed ports scattered across the car, gray is used for detailing on the side pods and between the rear verticals, and silver is used for the rear and dorsal intakes. The chassis is a dark gunmetal color, with copper axles and a lighter gunmetal on the jacks and accordion section. The wheels are this same lighter gunmetal color, with black vent ports and hard plastic tires. The vent ports are good on three of the four, but the left rear wheel has some smeared edges. The cockpit has black sidewalls and a bright blue seat and steering wheel. The seat belts are painted nicely, but whoever painted the buckle missed the mark by quite a bit.

A 1/24 scale soft vinyl figure of Knight Shoemach is included, and like the rest of the figures in the series is nicely detailed. The base is matte black with sharp white lettering and beveled edges, and like the car the printing is sharp and has no problem with opacity. The Knight Savior can be transformed into "sprint" mode by extending the car in the middle and lowering the rear wings and central intake. The nose can also be swapped with a set of higher wings to create "rally" mode. Finally, the cockpit can be accessed by sliding the lower part of the canopy forward, then removing the upper part of the canopy. The features all work great, and none of them interfere with the look of the car. I'm especially impressed by the canopy, which moves smoothly and locks together flawlessly.

As with the other cars in the Future GPX Cyber Formula line, the Knight Savior is an excellent replica but goes far beyond what details were available in the original animation. It's more traditional four-wheel layout makes it slightly easier to compare with more traditional open wheel racers, and looks like a good 1/24 scale.

This may be the new high water mark for Mega House's Future GPX Cyber Formula series. It was a few minor paint smears from being a perfect score, but the way they handled the engineering is far better than most of their previous efforts. Despite being one of the lesser-known cars from the series, it's well worth adding to your collection. Very highly recommended.