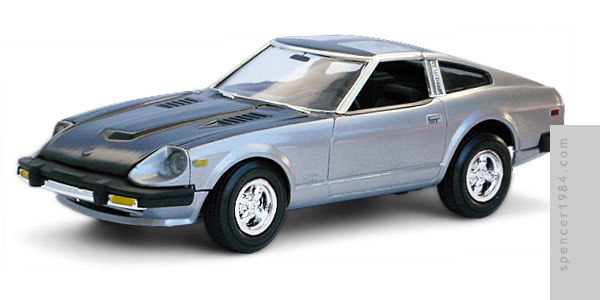 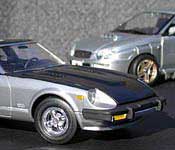 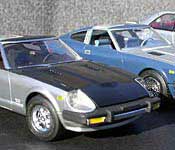 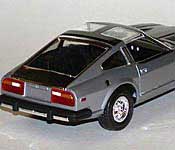 Cool Fact
Between 1984 and the recent reissues, many names were "lost" to Hasbro thanks to copyright lapses. Bluestreak was one of those, and now goes by either "Silverstreak" or simply "Streak."

When the original G1 figures began to be reissued, one of the earliest waves included the civilian Datsun known to fans as Bluestreak. In an amusing aside, Hasbro made an unintentional homage to G1: all promotional material and box art used a different paint scheme than the actual figure, much like the "blue Bluestreak" 20 years prior. This time, they used the cartoon color model for 'Streak, while the figure remained solid silver/gray.

Eventually I will build a solid silver/gray Bluestreak, but this time I again went with his promotional image. The kit is a nearly stock buildup of AMT's 280ZX Turbo, with the exception of the wheels. Revell-Monogram's release of the Datsun 510 kit meant that I could finally give the G1 Datsun the appropriate four spoke wheels. Duplicolor Anodizit Base Silver and Testor's Gloss Black provide the appropriate paint scheme, with details (including the rear hatch) done in Bare Metal Foil.