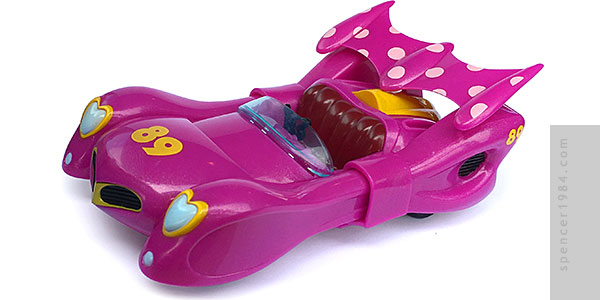 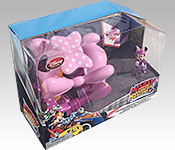 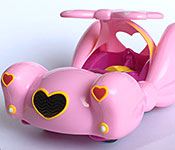 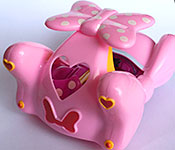 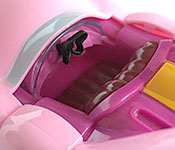 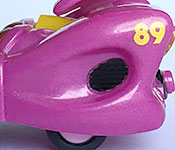 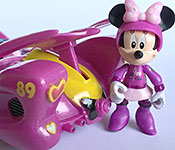 After ten years on the air, Mickey Mouse Clubhouse was replaced in January 2017 with an all-new series aimed at preschoolers, Mickey and the Roadster Racers. The new series follows the "Sensational Six"—Mickey, Minnie, Goofy, Donald, Daisy, and Pluto—as they race around the world. Each driver has a unique vehicle that converts from a street car to an open-top racer, with Minnie driving the bow-themed "Pink Thunder."

The Roadster Racers cars are packed in a large window box, measuring 11" (28cm) x 4¾" (12cm) x 8¼" (21cm). While it's massively oversized for the car, it does allow the contents to be easily viewed through the massive front window. The front of the box also has a portrait of Mickey, Donald, and Goofy in their respective rides racing along a course that wraps around the left end panel. The series title and "Transforming Pullback Racer" is printed in the lower right corner. A Disney Store exclusive sticker is affixed near the top left corner. Both end flaps repeat the title, and while the contents can be removed either way it's far easier to get them out of the left side. The top and bottom are blank blue and black, respectively, and the back panel has all of the legal info below three photos that serve as the instructions for Minnie's car (see "Features/Accessories" below). Minnie and her car's parts are held to a folded tray that easily slides out of the box. Minnie and the car shell are held in place with plastic zip ties, and the racer is held with plastic bands. To save yourself time and frustration, have a set of side cutters on hand to go through all four in short order.

Like Mickey's car, the Pink Thunder is cast from rugged ABS that should resist most types of regular play. Unlike that car, though, this one is an assembly of four components: the central body, sides, and upper bow. Being assembled from multiple parts means there are multiple seams, and there are some particularly obvious ones across the tops of the fenders. The colors don't do the casting any favors, being bright bubblegum pink with yellow paint used for the stripes, light bezels, and grille surround. There's also several errant flecks of yellow scattered across the front fenders. The lights, grille, and windshield area combination of red, black, and light blue, and the roof bow is decorated with white polka dots.

The main car is a much darker pink (closer to purple), and looks far better. The only seams are mold parting lines, and while the paint isn't flawless it's much cleaner here than it is on the shell. The windshield is a low wraparound made of clear plastic and the steering wheel is soft vinyl, leaving the rear spoiler as the only "dangerous" part of the toy. The back corners could potentially be a poke or break hazard, but would require a great deal of force to result in any actual damage.

The whole point of this series is the "transforming car" gimmick, which is pretty straightforward on Minnie's ride. Getting the racer level inside the shell isn't an exact science, so your best bet is to just kind of stick the folded-up racer in place and massage it until it looks good. it can be removed by pulling down on either axle or pushing down on the cockpit.

To transform the racer into its final form, pull the front and rear halves away from each other and swing the spoiler up from behind the car to over the rear deck. All the sliders snap into place at the limits of their movement, so it's easy enough to tell when it's "done."

Finally, a Minnie Mouse figure is included. She's dressed in her two-tone pink racing uniform, and while she's not as bad as Mickey she's still not very well done. The casting and paint are still sloppy, the joints are still loose but limited, and the only way she fits in the driver's seat is with her hands either down on the seat or up over the windshield.

The Pink Thunder doesn't even try for a realistic CGI transformation, knotting up like a balloon animal while changing from one to the other. So with that possibility off the table, the designers did the best they could. Well, sort of...there are definitely some weird design choices here, like the roadster being such a bright pink while the animation models are pretty consistently closer to the racer's color. Otherwise it's a fairly respectable representation of the car, skipping the expected details but getting all the broad strokes correct. In roadster form the car is approximately 3¾" (9.5cm) wide and 6¼" (15cm) long; in racer mode it's 3" (8cm) x 6" (15cm).

The racer is actually pretty good, with a clear "Penelope Pitstop" vibe that's nice to see. Unfortunately, the outer shell and figure are both left wanting, so plan your purchase accordingly.