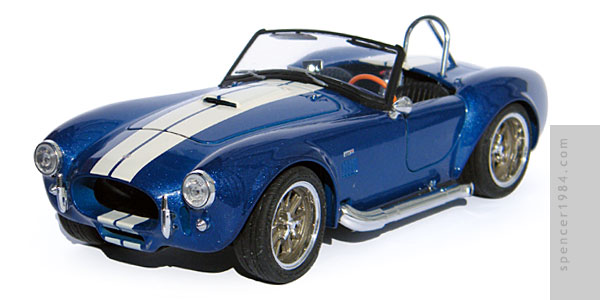 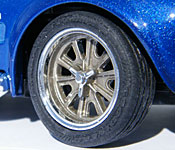 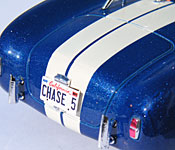 I assume that the car used in Finish Line was a kit car, though it was close enough that Welly's Cobra 427 S/C was pretty close right out of the box. I replaced the stock wheels with a set of wheels from a 1/32 Jada diecast and tires from my parts box. It was actually two sets of rear wheels, so they were way too wide to use without modification. I sliced off the outer rings at two different depths, then made another set of cuts close to the spokes. The rings were left chrome, while the spokes were painted with Model Master's Jet Exhaust. The car sat too high with these new tires in place, so I shaved down the front suspension and moved the rear axle stubs to correct the ride height. The last major change was the bumpers: I replaced the jack points with a set of smooth tusks made from bumpers I found in my parts box. I also cut off the vent windows, repainted the windshield frame, and added a screen-accurate license plate.