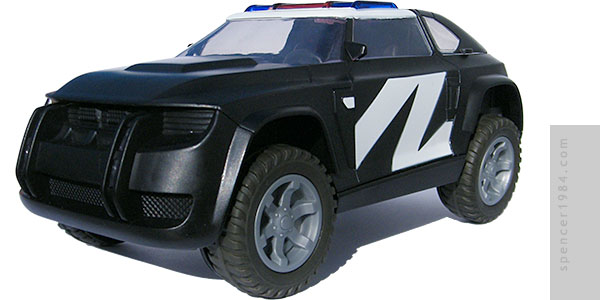 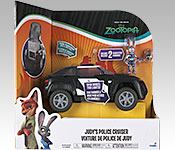 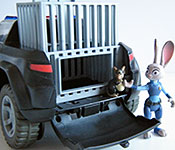 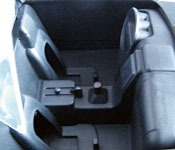 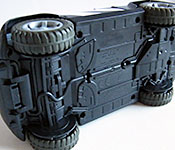 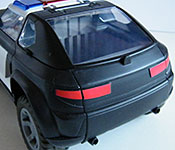 J Mays is an automotive designer who's work includes the Audi Avus, New Beetle, and 2015 Mustang among others. A chance encounter with John Lasseter led to Mays doing animated feature design work, starting with Big Hero 6. While his work on that movie was limited to character/costume design, he was able to use his automotive background for the myriad vehicles seen throughout Zootopia: from the Isetta-inspired mouse car to the vertically articulated giraffe car. One of the most recognizable vehicles used in the film is the massive ZPD SUV, a vehicle large enough for rhinoceros cops but user-friendly enough that officer Judy Hopps can operate it without difficulty. Fortunately for Mays, Disney only required external designs and he could ignore the logistics nightmare that controls for these vehicles would have been.

Judy's Police Cruiser is in an open package to allow for buyers to play with one of its action features. The base of the package is 11½" (29cm) x 4¾" (12cm), and 2½" (6.5cm) thick. The front and short end panels are white with a picture of Nick & Judy, the vehicle title in English and French, and the age restriction. The bottom panel has all of the legal info and a callout that 3x AAA batteries are included. Inside of this base is a surprisingly thorough 4-page instruction sheet that details how to work the action features and change the batteries in multiple languages and with diagrams. Rising from the base, the cardback is 11½" (29cm) high, with a rounded corner on the top right and folded in such a way to create a triangular wall along the left edge. The front of the folded cardback has the movie title, a callout (with photo) of the Cruiser's trunk/jail cell feature, and the Judy Hopps and Law Breaking Mouse figures in a clear blister. The Cruiser is on a yellow-orange folded cardboard plinth that matches the floor of the base and fades up into a silhouette of the city. The tall side panel has photos of other toys in the series, while the back is dominated by a large and incorrect photo of the Cruiser (showing white working lights in the extreme edges of the upper and lower grille openings, rather than the actual blue and red flashers in the verticals of the push bar). To remove the Cruiser, you have to get the plinth off the base by either cutting open the bottom or tearing the plinth off, then removing two twist-locks. A plastic tray is folded around the vehicle to hold the panels closed, and can be easily removed once any of the three tabs are cut. It's a nice looking piece, and the "try me" feature is probably a good idea given how misleading the photos are, but I still dislike open retail packaging.

For something so unapologetically sold as a toy, a lot of nice work went into this. Everything is made of plastic, opaque for the body and clear for the roof/window sections. The casting is clean and straight, with sharp edges, no swirls, and minimal sink marks. Both forward and rear canopies sit tightly against the body and are only given away by the relatively discrete roof hinges and rear canopy lift points (the forward canopy uses the sideview mirrors as lift points). The tailgate is so perfectly aligned that I did not even realize it opened at first. Paint apps are limited to the white side marker and "Z" logos, the roof, light bar, and taillights. Registration is excellent all the way around, but coverage and edges are hit and miss: the lights are all dead-on, while the "Z" logos have some edge ghosting. The roof has mediocre coverage and poor edges for the white panel, but the black posts and rear section are flawless.

The interior is a single-piece bucket, with very simple seats, dashboard, and center console detailing. Both seats have pegs to fit between figures' legs, and notches in the backs to accommodate various tails. Although detail is extremely limited, the effort made to include things like accelerator and brake pedals, shift and brake levers, and steering wheel spokes is appreciated and shows a nice effort. The cargo area has a non-removable cage that can telescope up to hold taller criminals and/or expose the opening behind the tailgate. There is a single peg in the floor of the cell to hold the Law Breaking Mouse in place.

The biggest and most pleasant surprise was the chassis. I've come to assume that toys (and in many cases, diecasts) will have little or no chassis detail, but Judy's Police Cruiser is excellent. Despite being cast from a single piece (plus the battery cover), it has a recognizable undertray (with bolt mounting holes), lower A arms, subframe mounts, exhaust pipe, fuel tank, rear control arms, a rear axle with differential, and crosswise muffler with dual (hollow tipped!) tailpipes. The designers even made an attempt to negate the ugly hollow tires by placing semicircular shields inside each tire. It's not 100% effective, but the effort is appreciated. Looking at it from the side, a coilover is visible in each fender opening. The tires are cast in a gray/brown with light gray snap-in wheels.

Overall this is awesome work, and only the concessions made in the name of it being a toy are holding it back from a higher score. Other manufacturers could take note of what's been done here.

The two sections of the roof open with their hinges on the SUV's roll bar. The front section lifts to 90°, while the rear section opens the same amount but then telescopes up to expand the cage. The tailgate folds down, taking the rear valence and tailpipes with it. Rolling the vehicle forward activated the front flashers, which alternate between red and blue. Despite what some promotional materials imply, the only working lights are these flashers, and there are no sound effects. These can be fully deactivated by a slide switch on the chassis just ahead of the left front tire. The battery box is located just behind the front axle, and can be accessed with a small Philips screwdriver. Finally, two figures are included: Officer Judy Hopps in her tactical uniform, and Law Breaking Mouse. Judy is articulated at the neck, shoulders (swivel & hinge), and hips. The mouse is a single solid piece. Sculpting and paint on both are "OK" - easily recognizable and generally clean, but with several rough edges.

Sculpt-wise, the SUV is very nearly dead-on. From the six-lug wheels to the low profile light bar and the recessed driving lights to the stepped bumper corners, there are a lot of details that Tomy got just right. Unfortunately, they did skip several paint applications including the fender and hood "Police" lettering, the lights, and the wheels/suspension. Odds are that 99.9% of the people buying this won't notice (or care). Since the internal scale of Zootopia is open to interpretation, there's really no way to absolutely define what scale this is supposed to be. It measures 4¼" (11cm) wide, 8½" (21.5cm) long, and 3¾" (9.5cm) tall.

This was a pleasant surprise. When I saw it on the shelf, I expected a halfway decent near-1/24 scale vehicle that looked "close enough." The more I look at it, though, the more I feel it appropriate to spend some time adding extra paint details to show off the excellent sculpting work. The play features are fun but unobtrusive, and the figures are decent. Highly recommended.