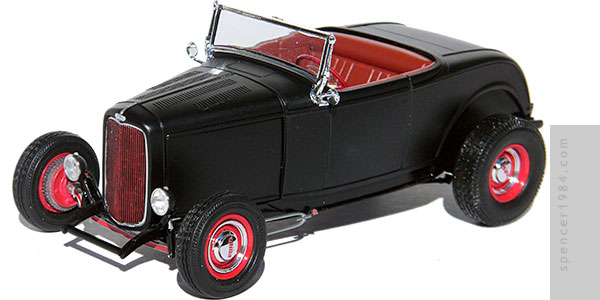 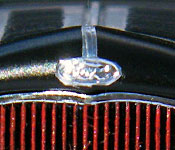 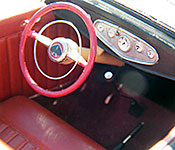 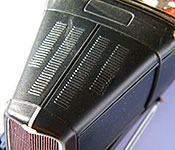 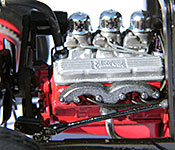 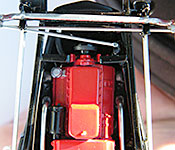 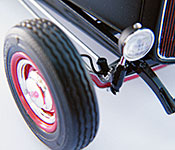 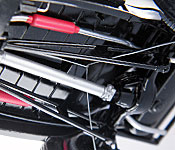 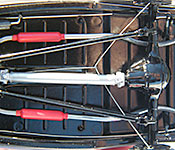 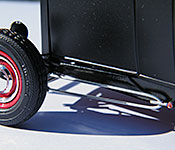 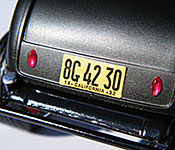 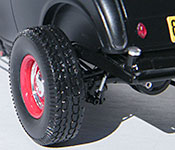 Faith Granger's Deuce of Spades was a unique car movie in that the people making it knew their cars and knew their history. The few unavoidable anachronisms that did sneak through (for safety or reliability reasons) were downplayed to the point of near-invisibility, avoiding problems that happen in other movies. I started with Revell's Highboy for my model of the eponymous vehicle, which had the broad strokes correct but needed nearly every detail altered.

The first thing to go was the engine, which was a late model Ford in the kit but should have been an early small-block Chevy. I took the block, heads, and oil pan from AMT's '55 Chevy Stepside pickup, while the intake and exhaust manifolds, distributor, coil, generator, belt, fan, and Powerglide all came from my parts box. The valve covers were sourced from Replicas & Miniatures of Maryland, which had the movie-correct "curved script" Edelbrock covers. Polar Lights' '64 Pontiac donated its triple carburetor setup, while Revell's '49 Mercury provided the air cleaners. The engine was then painted Tamiya red with various metal shades, and detailed with full wiring and plumbing.

Next was the chassis, of which I used far less than I had originally intended. I removed the stock engine mounts, and made new ones to mate up with the forward mounts on the Stepside's block. Although the front suspension looked close to the movie car's at first, closer inspection revealed that there was essentially nothing useable out of the box. I found a suitable axle in Monogram's '32 Ford Street Rod, but everything else—hairpins, drag link, tie rod—had to be scratch built from wire and plastic. I was able to use the rear axle and arms, but replaced the late model coils and shocks with a leaf spring from my parts box and scratch built shocks. The exhausts were also entirely scratch built, using a combination of styrene tubing, aluminum tubing, and stainless steel rod. The master cylinder was replaced with one from Revell's '40 Ford, and the finned brakes were from Scenes Unlimited. Brake and fuel lines were made from various wires.

Inside, I replaced the dashboard with one from the same Monogram '32 that gave its front axle. The steering wheel came from AMT's '55 Corvette, which had the right shape but wrong horn for the Deuce of Spades car. To correct that, I made a new horn button from a metal dot covered in BMF, arms from thin wire, and a ring from even thinner wire. This also received the only decal of the build: the movie's spade logo, recreated in Illustrator and printed onto clear stock. The steering column, gas pedal, shifter, and handbrake lever were scratch built, the brake pedal was taken from Revell's '40 Ford, and the floor was flocked with dark red paper. Everything else was done box stock, painted primer red with clearcoat for the leather, black for the dash, Model Master Desert Sand for the steering column, and Testor's Dark Red for the wheel. The gauges and door handles were detailed with BMF and paint.

Finally, it was time to tackle the body. I filled in the door handles, sanded off the sides of the hood, and added louvers to the top of the hood using Archer Fine Transfers' decals. The body was then painted Tamiya Semi-Gloss Black. The parking lights were modified from the small lights that were in Moebius' Tumbler, the taillights were nail art bling, the mirrors were from Revell's '40 Ford, and the wheels were from R&M with Monogram '32 Ford hubcaps and parts box beauty rings and tires. Since the kit had no trim on the radiator shell, I needed to add the Ford emblem. I pressed aluminum foil over the Ford emblem on the transmission pan to make a copy of it, then filled the back side with superglue for strength. Once dry, I carefully cut to the edge of the oval and added the longitudinal trim by stacking two thin strips of metal tape. The final detail was a custom license plate, made based on pictures of Faith's '32.