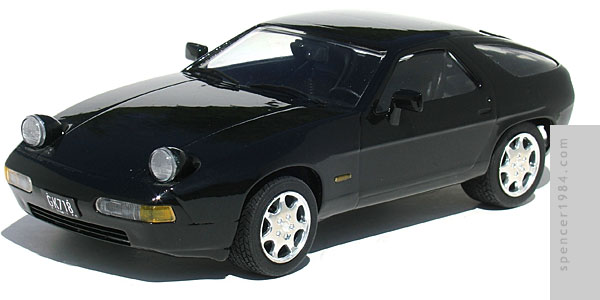 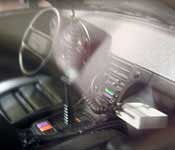 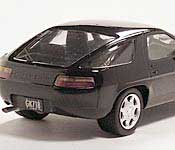 In the 1986 series Batman: Year One, Bruce Wayne's first night as a vigilante went pretty dismally. After having been shot by the police, he staggers back home in a Porsche 928, smashing the car into another vehicle in his own garage. In 1990, during the debut story arc of the comic Legends of the Dark Knight, the Porsche returned as Batman's car with a few extra electronic accessories. It was a nice bit of continuity, and allowed for the idea that Bruce had the car "scrapped," but in reality he just sent it downstairs for repairs and upgrades. I built this car as it appears in LotDK #5, with the added gadgets.

The only "upgrade" that was specifically shown on-panel was a computer display mounted near where the original interior rear-view mirror used to be. However, the car must've had a good-sized CPU stashed somewhere, and the 928 has very few locations the mount a computer. I chose to put it in the back seat behind the driver's seat, made from various bits of scrap plastic and parts box items. A group of wires was run from the CPU along the center console and under the dashboard, tied off to look neat but not quite as "polished" as later Batmobiles should look. I also added a 3.5" floppy drive under the passenger's side of the dashboard, and made the overhead display from the valve cover of a Ford Explorer V6. The monitor screen is a reproduction of the monitor that appeared in the comic, and it is hooked in to the system with a coiled wire, also as seen in the comic. The wire presented an interesting challenge, as it had to be plugged into the monitor and yet realistically drape and feed under the dashboard. Because the Porsche has closed glass all the way around, I had to get everything lined up and plugged in to where it belonged without being able to touch anything. I ended up tying a string to the end of the wire, and feeding that string under the dashboard. By keeping the string taut as I installed the interior bucket, I was able to pull the wire into position.

Everything else on the kit was built pretty much box stock, though I did alter the headlight mounts to make them look a little more realistic. The license plates are my best guess of what they should be based on the comic: it definitely has license plates, but the numbers were distorted by the headlight beams. I used this car as a test bed for a new painting technique, figuring that since I was building a model of a rebuilt wreck, any paint flaws would actually look appropriate. I'm actually pretty happy with how it came out, and I'll definitely be trying this again: rather than dealing with the often-tempermental gloss black (especially in the recent high heat & humidity), the body was painted flat black and clearcoated to achieve the gloss here.