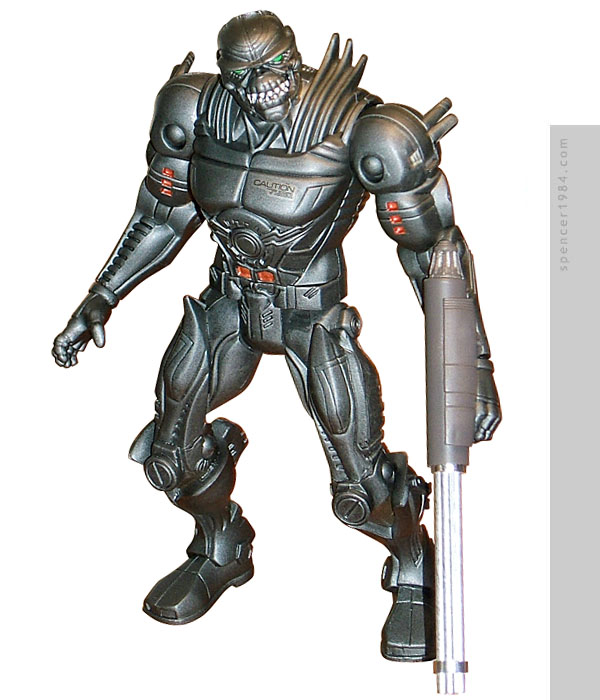 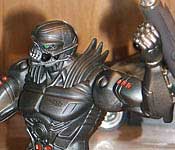 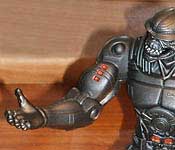 Cool Fact
Though Metallo wasn't in the movie Superman Returns, he did appear in the tie-in video game.

I hadn't bought Metallo planning to make a custom out of him, but once he was out of the package I knew I couldn't leave him alone. There was definitely potential there, but it was hidden behind a lot of bad manufacturing - including some odd sculpting, a bad paint job, and terrible floppy joints. My first step was to glue the knees solidly into place. I didn't necessarily want to lose the knee articulation, but I'd rather that than have it take a tumble off the shelf because they gave out. To add a little more useful articulation, I added wrist joints in both arms. Although I don't usually go out of the way to add articulation, the wrist joints were pretty much a necessity thanks to the goofball poses the arms were sculpted in. To add the joints, I cut off the hands and drilled holes into the hands and forearms. A screw was sunk into each hand, leaving about 1/8" sticking out (looking a bit like a metal mushroom). These were forced into the holes in the forearms, with the screw heads acting as anchors and the screw shafts acting as pivots. With the mechanical work done, the figure was repainted Model Master Titanium with steel, copper, and silver highlights. The eyes were painted fluorescent green, and the teeth were painted flat white. A parts box decal was applied to the chest, and the whole thing was sealed with several layers of Dullcote.

There was no salvaging the gun, so I just made a new one from scratch. I decided a multibarrel gun would look pretty cool, so I started by cutting lengths of aluminum tubing for the barrels. Plastic tubing was cut to act as sleeves for the barrels, then the whole thing was installed into a gun body made from plastic tubing, plastic rods, and parts box greebles. The gun body was painted with Rustoleum metal paint, and Bare Metal was wrapped around the sleeves to match the barrels.

After his trip through the paint booth, Metallo still isn't perfect but he looks a lot better. No longer a bootleg wannabe, he can now stand on the shelf with the rest of my villains with pride.