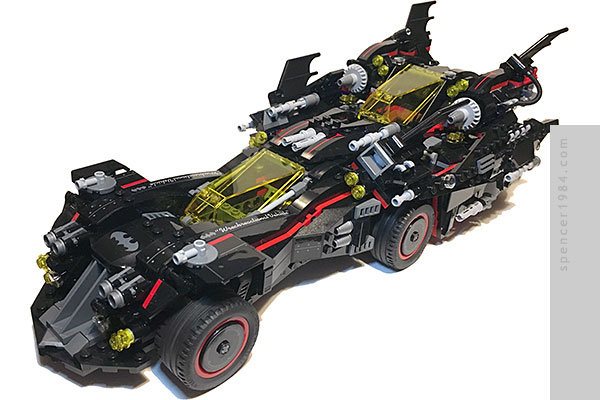 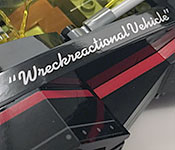 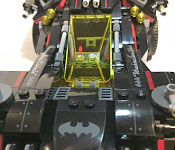 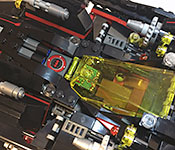 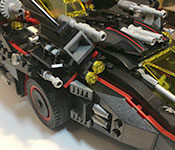 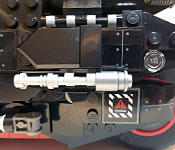 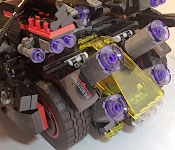 Once he learned his Very Important Lesson™ near the end of The LEGO Batman Movie, Batman needed to upgrade from his two-seater to something more family-friendly. This is the Bat Family, though, so rather than a van or SUV, Batman opted for the massive "Ultimate Batmobile." This 4-in-1 vehicle not only provided transportation for Batgirl, Robin, and Alfred, but gave each of them the ability to act autonomously with a Batwing, Batcycle, and Bat-Tank, respectively. The overall set consists of nine bags, 40+ stickers, and over 200 pages of instructions...so it really needs a dedicated build area for its rather long build time (I broke it up across several days, working on one bag then taking a break to go do something else for a while). In addition to the vehicle(s), the set also comes with a working Bat Signal and minifigs of Batman, Robin, Batgirl, Alfred, Polka-Dot Man, the Wicked Witch of the West, and two of her flying monkeys.

I had said in the previous Batmobile's writeup that is was a huge car at 11" (28cm) long and 6¼" (16cm) wide, though much of that was wheels and suspension with the main part of the Batmobile measuring 10" (25.5cm) long and 3" (8cm) wide. That was huge by minifig standards, but this Ultimate Batmobile is truly a titanic machine measuring 14” (37cm) long and 6” (16cm) wide with very little of that consisting of "trim." It actually looks far better and more cohesive than you'd expect from a combination of four separate LEGO vehicles. The individual vehicles look great, too, with the Batmobile and Batwing being particular standouts.

The Batmobile forms the front of the Ultimate Batmobile, and measures 9” (23cm) long and 4” (12cm) wide. It has four stud shooters across the front, two hinged double cannons mounted ahead of the rear wheels, variable-pitch rear thrusters, and four forward-facing blasters. The cockpit is mounted backwards from what you usually see in LEGO sets, giving it an interesting look and a cool forward-hinging function. It looks very much like an upgraded version of the stand-alone Batmobile, with additional armor plating and weapons added to give it a "final battle" look.

Robin's Batcycle features folding wheel panels, similar to other hoverbike toys we've seen in the past. It's easily the weakest of the four, but doesn't look bad. Folding the wheels up allows it to be fit in the Batmobile, right below the thrusters and behind the cockpit.

Alfred drives the Bat-Tank, a four-wheeled vehicle with more than a passing resemblance to the Tumbler. It's job is to be the heavy, and it does it with extra armor plating, two retractable rapid stud shooters, four rearward-facing blasters (two on top, one on each side), two mortars, storage for the minifigs' melee weapons, and if all else fails, four retractable thrusters that can be deployed as flamethrowers. While not as stylized as the Batmobile or Batwing, its short wheelbase and blocky design make it look like something that could both give and take a beating. With the thrusters deployed, it connects to the Batmobile to form the back half of the Ultimate Batmobile.

Finally, Batgirl's Batwing is a pod set between two small wings and armed with four forward-facing blasters and two spring-fire missiles. The hinged wings are part of its conversion, but can also provide some interesting variations to the craft's design. It connects to the Ultimate Batmobile by plugging in just above and ahead of the Bat-Tank and folding its wings around the vehicle, forming a kind of upper lookout station/gunner's platform.

I was honestly surprised at how solidly the four vehicles connect to each other. Combining them into the Ultimate Batmobile looks harder than it is, and with just two or three vehicles connected it still feels very loose. But then the Batwing gets plugged in to the whole deal, and suddenly it becomes a totally different beast. It's a great indicator of the cleverness of LEGO's designers, and a great item for both Batman and LEGO fans.