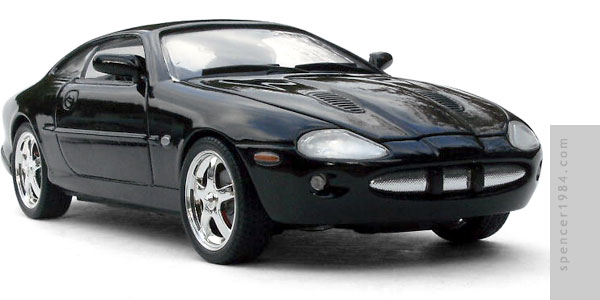 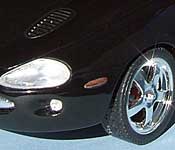 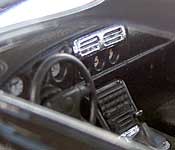 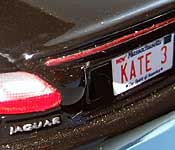 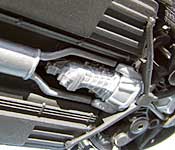 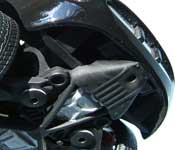 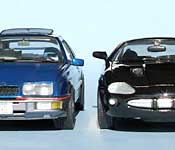 Fourth in my series of Misfile models (after the Merkur XR-4Ti, Acura RSX-S, and Nissan 240SX) was Kate's Jaguar XKR. This was looking to be my most involved Misfile custom so far, since the closest thing I knew about was the drop-top XK8. But good fortune smiled on me this time and I found Mondo's XKR diecast. It wasn't a plastic kit, but it was the right scale and was a pretty good match to Kate's ride.

The biggest problem with this replica was the same problem that Chris Hazelton had when drawing the comic: the XKR was only available with an automatic transmission. To remedy this, I carved out the original transmission and surrounding pan until I had a reasonable facsimile of the 1:1 transmission tunnel. I then added a six-speed gearbox out of a Viper, figuring that ought to be stout enough to handle whatever the Jag had under the hood. I also opened the driveshaft tunnel and added a proper driveshaft, removed the copyright information cast into the chassis, and removed a lot of the unnecessary plastic (including the shipping posts, panels around the engine and front bumper, and assembly screw points). Once the front chassis area was cleaned out, I added more accurate bumper mounts, some intercooler detail, and a guard to protect the bottom of the engine against road hazards. It may not be a perfect match to the 1:1, but it's a lot less toylike now.

The interior was repainted and carpeted, with Bare Metal trim and new gauge faces. I also replaced the stock steering wheel with one from the parts box, and the gear selector was replaced with a manual lever and boot. Since Kate's engine modifications were left as an enigma, I kept the engine as it was out of the box.

Body modifications were minimal. The biggest change I made was carving out the metal behind the headlight lenses to form proper headlight buckets. I also removed the pins from the backs of the lenses, so that I now had much more realistic looking headlights. A similar (though much less involved) process was used for the driving lights in the lower front fascia. The body was then repainted gloss black with BMF accents. Looking back through the comic's archives, the wheels were drawn a couple of different ways. I decided to go with a set of lightweight five-spoke racing wheels to match the "bio" image over disc brakes from my parts box. New mirror inserts and a "KATE 3" vanity plate finished this model.