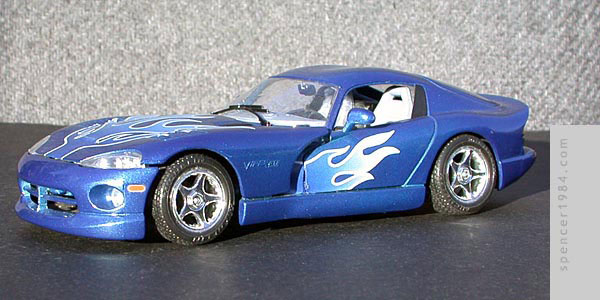 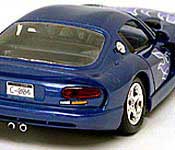 Despite the rather unfortunate name, Side Burn has one of the coolest designs from the Robots in Disguise series. As the last of the "standard grade" car brothers, this model received the same treatment as X-Brawn and Prowl - instead of creating a model that looked exactly like the toy, I left it closer to a stock Viper so that the "power up" version could look more impressive. The best way I thought to differentiate between standard and power-up Side Burn was to leave the engine under the hood for this version. Since the Spychanger Side Burn was blue with flames but didn't have an exposed engine, it seemed my choice was confirmed.

After deciding how the end result should look, it was simply a matter of creating the proper decals in Illustrator, printing them onto white decal film, and applying them to the model. The only modification I made to the Viper kit was filling in the scoop in the front center of the hood - no version of Side Burn/Speedbreaker had it, and it would have broken up the lines of the flames. Otherwise, I just did some minor detailing and cleanup.