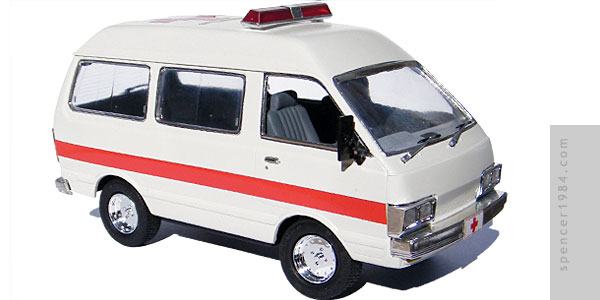 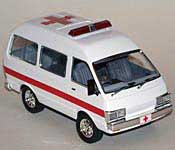 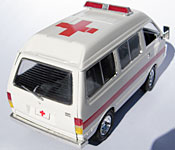 Cool Fact
In issue #3 of the orignal G1 comics, Ratchet's medical deck was a separate entity, and was even capable of verbal communication.

Before Energon, Alternators, Armada, Beast Machines, Machine Wars, Beast Wars, or Generation 2, this was where it all started for me. Even before I saw a single episode of the original cartoon series, Ratchet was the first Transformer I ever owned. It's also the reason why my 1/24 Tranformer model collection focuses on the toy versions of the characters instead of the cartoon versions.

Like Ironhide, this model was built nearly stock. I did omit most of the seats, leaving the back area open for use as an ambulance. A sheet of .015" styrene was used to cover the various holes and mounting brackets left in the floor, and the rear wheel wells (which normally were covered by the rearmost seat) were smoothed and finished. I also scratchbuilt an inner door panel for the van's sliding side door.

The van body was painted PlastiKote Gloss White, and the window frames, door handles, and bumpers were detailed with Bare Metal Foil. The stripes and red cross were made from automotive pinstriping material, and the red cross license plates were printed onto thin card stock and metal-backed.