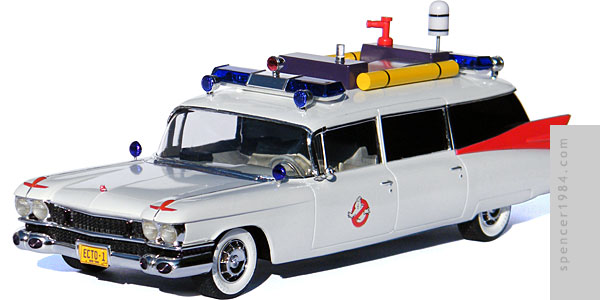 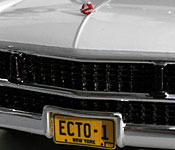 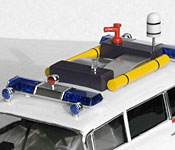 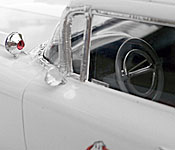 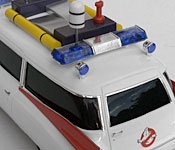 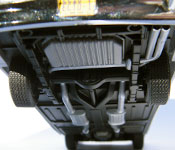 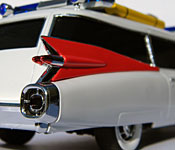 After finishing the original Ecto-1, I wanted to continue the series with the Cadillac as it appeared in the cartoon series The Real Ghostbusters. Although it is probably supposed to be the same car as what appeared in the first movie, it received quite a few changes to make it easier to animate.

The biggest change from the movie was the simplified roof rack. It was actually no longer a "rack" at all, but a few technical-looking boxes mounted directly on the roof of the ambulance. As with my earlier build, this was almost entirely scratchbuilt...although it was a lot quicker and easier to do this time around. The main boxes, ducts, and tubes were made from styrene stock, and painted to match the animation model. The dome is from the kit, mounted on a scratchbuilt stanchion. The strobe light is a section of clear sprue, polished and clearcoated, and the simplified proton gun is a LEGO part (looking at some episodes, it seems that this very part was used as a model - so I used it pretty much as-is). The remaining roof lights are from the kit, though the red light was moved to the center of the forward light bar.

The interior is straight from the box, while the chassis is stock except for a modified exhaust pipe, now crossing over so that both pipes exit under the passenger's side as per the animation model. I had originally used the kit-supplied wheels & tires, but they did not look close enough to the animation model for me. So I replaced them with a set of wider parts box tires with painted whitewalls and '62 Buick hubcaps from Modelhaus. I was even able to make adapters for these and use the kit-supplied axles.

Changes to the body were relatively small, but there were a few: the "D" pillars were removed, the fender spots and mirror were added, and the mount holes for the ladder, pipe, and conduit were all filled in. I also made a tiny hood ornament and painted it up as the Ghostbusters logo. BMF and kit-supplied chrome were used for the trim, and the parking lights, strobes, and rear lights were colored with a black marker to represent tinted light covers (these were colored black in the cartoon, likely because the animators didn't realize how many lights a '59 Cadillac had and wanted to simulate jet intakes/exhausts). I also drilled out the cast-in headlights and replaced them with a set of clear resin lights that I cast based on the originals. The final paint scheme is Tamiya Pure White and Bright Red, and a set of classic "Ecto-1" plates and StickerFixer door logos finished it off.