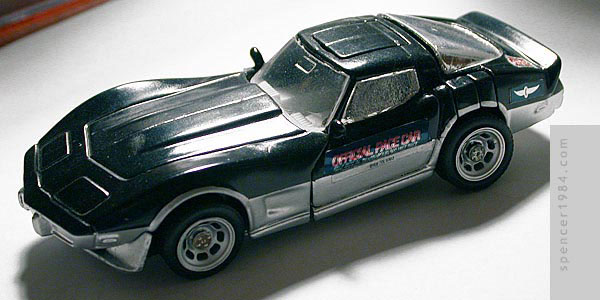 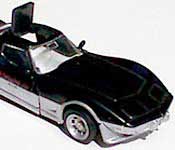 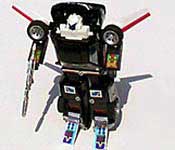 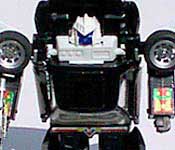 The 1978 pace car Corvette is one of my favorite automotive designs of all time. I also collect changeable Corvettes, be they Transformers, Go-Bots, M.A.S.K., or any of the several knockoffs that have been produced. So, it was just a matter of time before I built my own custom Corvette TF based on the '78 Indy pace car.

My base toys for this project were a broken first generation Autobot Tracks and a Road & Track diecast yellow 1978 Corvette. I started by disassembling Tracks, and cutting away all of the car components except for the roof. I also cut the R&T Vette into pieces using the Transformer as a guide. Once cut, all of the mounting pins and reinforcing plates needed to be removed from the inside of the metal Corvette body, which I did using an air grinder and Dremel tool.

Doing a "test-fit" revealed a problem I had not considered earlier; Tracks' Corvette body was just enough wider than the '78 to prevent a simple parts swap. I now had to remove quite a bit of material from the robot's sides to allow the narrower Coke-bottle sides of the '78 to fit the nose and tail pieces correctly. In addition, I needed to narrow the rear fender flares (robot's shoulders) so there was a smooth transition from the doors to the rear end. Now that the body was narrower, though, the wheels and tires stuck out past the fenders nearly the full tire width! So, it was another trip to the saw to shorten the axles.

I finally got the body to the correct proportions, and then set to work assembling them into a working Transformer. I wanted to build this as if it was an original G1 Autobot, and used that thought as a basis for some of the custom work I did from this point on. Instead of using the stock R&T wheels, I removed the tires and narrowed the wheels to accept typical Transformer sports car tires (i.e. Sideswipe, Wheeljack, and Tracks). I also drilled out the center hub of each wheel so that I could attach the wheels using the metal pins found on all G1 cars.

Tracks' feet were originally part of the nose of the Corvette; you pulled them out and rotated them 90° down. I did not have the skill to make such intricate cuts in diecast, and to re-form the nose of the Corvette using plastic had its own problems. I ended up scratchbuilding my own set of feet from plastic with custom hinges. I also replaced the wings behind the robot's shoulders with a modified pair of wings from a 1/100 scale Macross Valkyrie kit, and drilled out the robot's fist so that it could hold a gun (Mirage's hunting rifle). Finally, it was ready for paint.

The Pace Car's unique paint job was Testor's Gloss Black over Gloss Silver (the paint scheme was simplified a bit for the toy). I painted over the side windows of the car, for two reasons: A) the Tracks I used a base car was pretty well beaten, and the window glass was badly scratched; and B) I had to replace the windshield anyway (the curve of the glass on the original was too flat to match up with the new hood correctly), and there was no way the thin, clear windshield could be made to look like the thick, tinted side windows. Some of the original Transformers lacked true side windows anyway (i.e. Trailbreaker), so this was a compromise I could accept. Replacing the side windows wasn't an option, because that's where the chassis screws into the roof. In keeping with the "original" theme, I painted the roof hatch separately so that this figure can still accept a Diaclone driver in the passenger compartment.

Now all that was left was the stickers. Many G1 and Diaclone Transformers used "real" cars as inspiration for the toys: Wheeljack was an "Alitalla" (Alitalia) or "Marlboor" (Marlboro) Lancia Stratos, Mirage was a "Citanes" (Gitanes) Ligier JS-11 Ford, and Jazz was a Martinii (Martini) Porsche 935. Therefore, the concept of a "Pace Car" Corvette was no problem. Actually getting the stickers, however, was. I tried making my own, but I could not get them to look right. I did not want to make decals, because I still wanted this to be as close to the original TF styling as possible. Then one day I found Deltastar's Repro Labels (www.reprolabels.com). I was able to get a complete set of Tracks stickers for the robot, plus the custom-made door and rear fender stickers I needed, all at a great price!

As I was working on this project, I decided to give the figure it's own name and personality, just like the original Transformers. With that, I created the above tech spec using Adobe Illustrator & Photoshop. Since it seems I can never do anything the easy way, I didn't use an existing tech spec, but created this one from scratch using the style and dimensions of a first generation tech spec. The image on the far left was created in Photoshop using a picture of Tracks for reference. Everything else (including the red background mesh) was drawn in Illustrator. The bio reads:

FUNCTION: INTELLIGENCE
"Concentration is the secret of strength"
Stubborn, determined, and highly intuitive, VECTOR often appears to be a bit cold or aloof to others. Loyal and trustworthy to his close friends, but a ruthless enemy to all who cross him. Has great insight and analytical abilities, and is seldom caught off-guard. Reaches 250 mph in car mode and can use rear wings and rocket thrusters to achieve 450 mph for up to 12 minutes. In robot mode uses neural disruptor.
Have a question, comment, or criticism about this model?
Send me an e-mail with your thoughts!