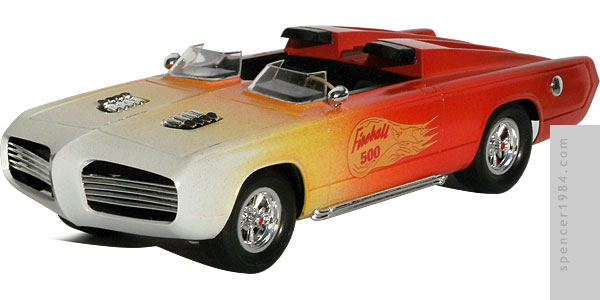 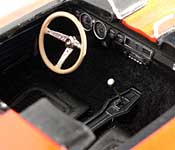 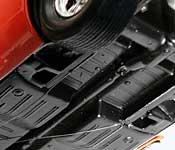 Cool Fact
Like many Barris Kustoms, the Fireball 500 spent quite a bit of time on the promotional circuit after filming wrapped. Also typical for these cars, it was substantially modified during this time: changes included separated seats, yellow tinted wraparound windows, hood pins, and a simple white/red paint job with more elaborate fireball graphics.

Even though it was going to be more work, I knew right from the beginning that I wanted to build this as the movie version rather than the more well-known promotional version. The biggest difference, of course, is the multi-color fade. I also prefer the clear windows and open cockpit, and thought that it would be cool to leave the option open to build the trailer and race car to make a full set.

So knowing which version I wanted to build, I watched Fireball 500 and read through Donald Stewart Jr's article in Amazing Vehicular Modeler #2. The article was badly cut up by the magazine's editors, but it still provided me with enough information to follow along with my own build.

My first steps included removal of the cockpit divider and hood pins. Next, the car was wet sanded and painted with Tamiya white primer. I then sprayed several colors through my airbrush to create the multi-color fade effect. Transparent yellow came first, and was mixed with transparent red to create the gold-orange mid tone. The ratio was tipped more towards red with each pass, until I was shooting straight transparent red. The rear of the car had a few drops of blue added to recreate the trailing burgundy. Once dry, the body was sprayed with multiple coats of Future to achieve a nice glossy finish. Lastly, the inside of the body was painted black for contrast through the grille openings and to ensure opacity. I was able to get a set of movie-accurate decals from a friend, which went on flawlessly. The fuel cap and mirrors came from the parts box, but all other trim components were kit-supplied.

The engine was assembled and detailed with ignition wires. I also filled in the axle divot that went through the oil pan and block. This meant that I had to switch to two short axles for the front wheels, but the cleaner engine bay was well worth the extra work. I considered replacing the intake manifold with something a little more intricate, but the older casting is actually not too bad once detailed appropriately. Everything else under the hood is straight from the box.

Chassis upgrades were pretty simple: I added rear fender wells from my parts box, and enclosed the engine compartment with sides made from .040" sheet styrene. Neither of these were really critical, but I thought they'd add a more finished look to the model (quite possibly more "finished" than the screen-used car, if other Hollywood cars are any indication). I also added brake lines and painted the various cast-in details like the fuel tank and transmission snout. The wheels are from the kit, but I thinned down the bead and mounted them in larger parts box tires to match the movie car's stance. Brakes are a disc/drum combination, as a way of acknowledging both Donald's work (though I left my rotors unpainted) and the original movie car. The discs are #8 washers and Model Car Garage calipers, while the drums are modified parts box items.

The cockpit of the Fireball was built box stock with the addition of fuzzy carpeting and painted details. I was quite impressed by the quality of the gauge faces, which remain sharply defined despite the age of the tooling.

Like other classic models, the detail on this may seem crude to builders who are used to newer castings. But it holds up surprisingly well, and nearly all of my upgrades were based on personal preference rather than necessary corrections. Although the paint fade is not an exact match to what appeared in the movie, I'm happy with the overall look and it was a fun way to try some new paints and new techniques on the airbrush.