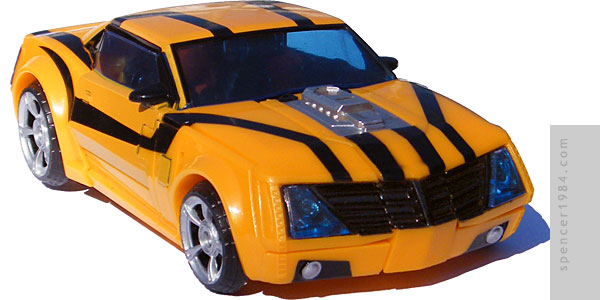 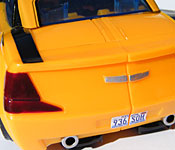 The demise of the Alternators/Binaltech and Human Alliance series meant that my larger-scale Transformers collecting had to return to its roots in scale models. Easy enough for some characters, but a bit harder for the newer figures that use highly modified or entirely made up alt modes to avoid licensing fees. Then I happened across an oversized knockoff figure of Bumblebee, which had the same mold as the standard Hasbro figure but in a near-perfect 1/24 scale.

The plastic quality was surprisingly good for a KO, but there were several paint apps that were lacking. I used Krylon Old Equipment Yellow to paint the A pillars and touch up some spots on the body, dark red for the taillights, and silver for the wheels, brakes, tailpipes, and trim. The stripes, grille, driving light inserts, exhaust ports, and ther black details were done with a combination of ink and paint. Finally, I added a Nevada license plate to the rear, and had the first Transformers: Prime character to fit in with the rest of my model collection.