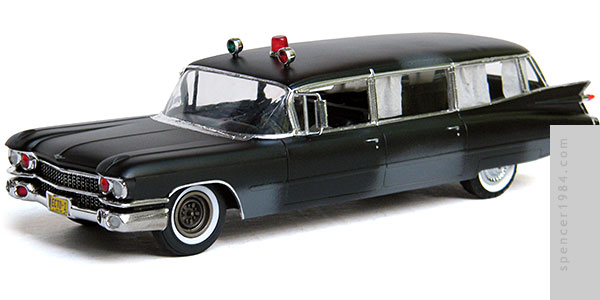 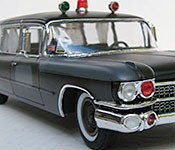 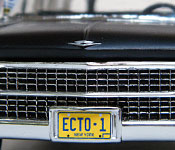 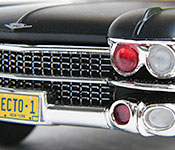 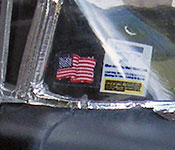 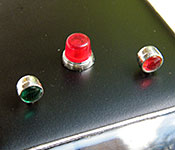 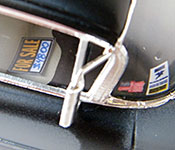 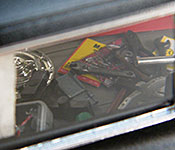 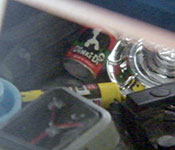 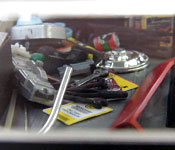 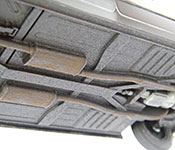 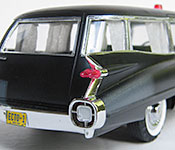 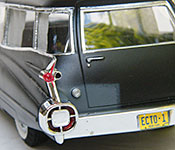 While I've been building my Ectomobiles in chronological order, there was one omission that I felt somewhat bad about skipping: the original Miller-Meteor combo that rolled up to the front of the firehouse in 1984 ("Everybody can relax, I found the car"). Then as I was working on my Ecto-1B, I ran across the nearly forgotten remnants of a project I started over 20 years ago. It was an Ecto-1A I found at a flea market, missing its roof rack but otherwise intact. This was long enough after its release that AMT no longer provided parts, but before the launch of eBay or online forums that made finding replacement parts so easy. So, left with a topless Ectomobile, I decided to build it as an "in progress" version of the car. The results weren't pretty, so it went into a box and I moved on to other projects.

When I came across it years later, I realized it still had some potential. So, like with my Optimus Prime model, I combined my original work with more recent parts kits and more experience to build something I could be happy with.

The first modification was the roof: the mounts for the billboards were sanded off, and the holes for the roof rack were filled in and sanded smooth. I also filled the seams between the fins and the body, and trimmed the front fenders so they would accept the grille/bumper from Monogram's '59 Cadillac Eldorado. Filling the rear fenders ended up destroying the molded-in trim, so I replaced that with fine wire and made the lower body trim from strip styrene. Finally, I removed the right fender skirt to match its screen appearance. Once the modifications were done, I painted it using a combination of Tamiya TS-4 German Gray and TS-29 Semi-Gloss Black. We only got to see the passengers' side of the car in the movie, and in doing my research I ran across John Spangler's Pre-Ectomobile custom. I liked the arrangement he used for the driver's side, asked if he'd mind me using it, and when he agreed I went ahead with it.

The chassis is essentially unmodified, though I did need to replace the fuel tank from another spare Ecto chassis I had. It was then weathered and rusted to look like it needed the laundry list of repairs Ray cited ("Needs some suspension work and shocks, brakes, brake pads, lining, steering box, transmission, rear-end...also new rings, mufflers, a little wiring.."). The front tires and rear hubcaps were from a Danbury Mint '59 Caddy, while the front steelies and rear snow tires were from my parts box.

Inside, I started by cutting out all of the Ghostbusters-specific gear. This included all of the cabinets, which meant that I had to recreate the floor, left rear door panel, and rear sides from sheet styrene. The modified interior was then painted and weathered, and I started adding junk. Cars like this were somewhat notorious for being used as dumping grounds, so I tossed in the fender skirt (painted to look like it came from another car and just never got installed), a section of exhaust pipe, an old battery, some parts, miscellaneous boxes, a few insecticide spray cans for the inevitable wasp nests, a bunch of old tools, and a "For Sale/$4800" sign. I also threw in a few Easter eggs, too: among the debris you'll see the exhaust nozzles for an X-34 Landspeeder, a flux capacitor, and a can of Dinky-Di dog food. Inside the body shell, I made a curtain rod from stainless steel wire and hung paper curtains from it. I also added the two window stickers in the right corner of the windshield.

Major work now complete, I only has a few details left. The inboard headlights and parking lights were replaced with some red lenses I had in my parts box. Because the car had no privacy tint strips at this point, I couldn't use the kit-supplied glass. I cut out and used the windshield, but everything else was made from either .005" or .015" clear sheets. A combination of BMF, metal tape, and paint was used for the trim. The outboard lights on the roof were from the kit, while the center light was made from a dome and a headlight bezel I had in my parts box. The large mirrors were also parts box items, modified slightly to fit the Caddy's doors. The rear bumper is a Modelhaus item (back before the Polar Lights kit, this was the only way to get a stock rear bumper), and its left inboard taillight was left out with the socket painted black. The final detail was a set of original "Ecto-1" license plates.