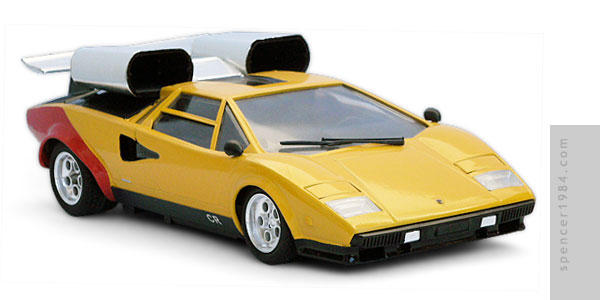 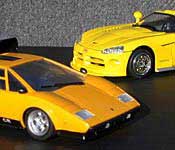 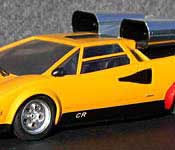 Cool Fact
Like minibots Bumblebee and Cliffjumper, Suntreaker's car mode was likely based on an existing Takara toy instead of a direct model of a real car. Go here for details.

Now on it's third and (hopefully) final phase, this was originally one of Tamiya's motorized kits. In it's first phase, I removed the body panels behind the cockpit and above the boot, then replaced them with sheet styrene, added a mesh grill where the boot was, and added the massive air scoops to the new deck. The scoops were originally halves of a Tic-Tac container, but I wanted something that was closer to oval in cross-section, like the original toy. So in phase 2 I replaced the scoops with a pair of highlighter marker bodies. The caps were too large, but the body tubes were the right cross section, and could be cut to the correct length.

After further consideration, though, I decided that I should have done more to make it look like the original Sunstreaker. The rear part of the rear fenders became the robot's upper arms, and they were red on the toys. While I didn't care much for the vertical break, I did like the red and yellow paint scheme, so I compromised. I put the division about where it was on the toy, but I changed the angle so it is now a continuous line starting from the fender flare. I also widened the black section of the rear deck and added the black rocker band with white "CR" lettering.

Earlier versions of this model did not look enough like the original Sunstreaker to satisfy me. There are still a couple of things that are not quite exact, but I think they detract from the lines of the car. For example, the rockers and rear fenders on the prototype were not curved at all, but square and angular. The rear fender openings were simple arches with no fender flares, and the fenders were considerably wider than the rest of the car. Finally, according to the cartoon, the tail lights were simple round holes in the backs of the fenders (these became the mounts for the shoulder rockets in robot mode), instead of the traditional Lamborghini-style tail lights.

The scoops, collector, and rear spoiler were chrome plated using metal tape, and the rockers were made on the computer and printed onto labels. The main body is Testor's Gloss Yellow, Black, and Red, with a layer of clearcoat over the whole car.