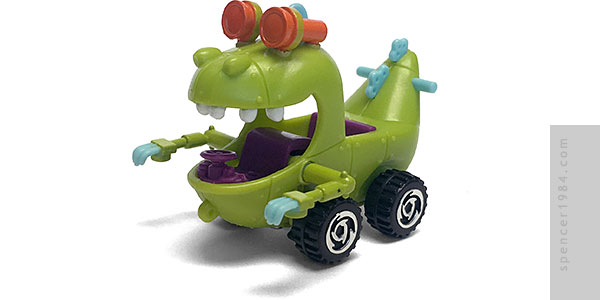 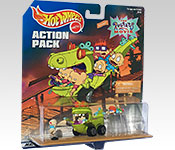 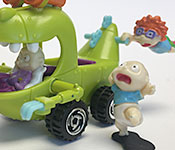 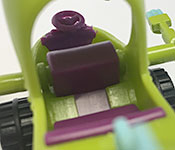 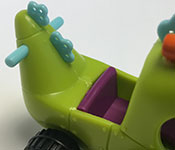 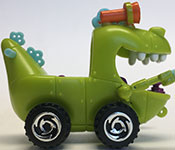 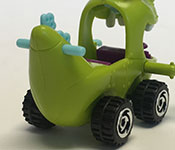 When the Reptar Corporation holds a contest with the winner getting a $500 prize (and presumable fame), Stu Pickles sets out to build the ultimate toy in the Reptar Wagon in The Rugrats Movie. Capable of speech, water travel, and much more, the Reptar Wagon goes on to become the regular mode of transportation for the Babies in both the series and subsequent films.

Hot Wheels' Action Packs came in what was essentially an oversized version of their standard mainline blister card. The cardback measures approximately 7½" (19cm) wide and 8¼" (21cm) high, with a 2½" (6.5cm) deep plastic bubble on the front. The blister has a "leg" and the cardback has a hang loop, so it could be sold on either a hook or shelf. The front of the card has a large scene of the Reptar Wagon on a rickety bridge with Phil, Lil, Dil, Chuckie, and Tommy inside. The Hot Wheels/Action Pack logo is at the top left, while the Nickelodeon logo and movie title are at the top right. The back of the card has product photos for both this and the other Action Packs available at the time (Sky Search, Toy Story, Snow Plowers, Solar Racing, Apollo Misson, and Drag Racing). The top left corner has a marketing blurb for the movie: "Rugrats Road Adventure! Join Tommy Pickles, his best friend 'Chuckie' Finster, and new brother baby 'Dill' [sic] for an out-of-the-crib experience. Climb aboard the Reptar Wagon and hang on for a 'dino-mite' ride!" The wagon, Chuckie, and Tommy are held to a folded cardboard tray inside the blister with twist ties.

The Reptar Wagon is a surprisingly complex assembly for its size and age. The main body is a plastic shell split down the middle, allowing the separate back plates and rear handles to poke through so that color edges are consistently sharp and there's no risk of paint wear. The six teeth are painted white, with a little bit of ghosting where it meets the upper jaw (lending more weight to Mattel making a smart choice making the light blue parts separate pieces). The eyes are separate pieces cast in orange with yellow bands painted on them, and the arms are a combination of painted and molded colors. The base is diecast, painted the same green as the arms , and the wheels are Hot Wheels' Off-Road Sawblades (a.k.a. Razors) with chrome centers. The front wheels have been modified to activate the toy's action feature (see below). The interior is at least three separate pieces all cast in purple: the main tub, dashboard, and steering wheel. The quality of the casting is excellent across the board, with the parts all having nice panel detailing and a good tight fit to each other. Paint is decent, but not brilliant. Aside from the ghosting around the teeth, the yellow on the eyes could have been cleaner and the paint on the arms and base look like they were trying to match the cast green plastic but didn't quite make it. Still, for a unique casting less than 2½" (6.5cm) long this is really well done.

Reptar Wagon's arms are attached to levers hidden behind the front wheels, and the wheels have been modified to include cams set at 180° from each other. This makes it so that when you roll it forward, the arms alternate waving up and down. It's far from perfect - sometimes an arm hangs "up" - but it's nicely integrated so as to not harm the look of the toy. Also included are three soft vinyl figures of Tommy, Dil, and Chuckie. Tommy is posed on a base running away in terror. Dil is cast as part of a pillow and in a seated position to fit in Reptar Wagon's front seat...the packaging shows him as removable, and while he technically is he's not supposed to be. A plug underneath him fits through a hole in the front seat. Chuckie is cast with his right arm out and his hair and other limbs blowing backwards, and he is meant to be clipped onto either of the Wagon's rear handlebars. The packaging lies about him as well, suggesting he can stand on his own when not clipped into place. The casting and paint apps on all three are as good as the Wagon itself, especially considering that the tallest of them barely cracks the ¾" (2.5cm) mark.

While most of it is pretty good, there were a few missed details here & there (I'm not counting the generic wheels, since those were pretty standard across the line of Action Packs). The biggest comes from the simplified colors: the interior should be made up of several colors, as should the eyes. Also, the arms are generally depicted as a much darker green than the rest of the body. There's nothing really bad, though, and if any of it bothers you it would be easy enough to do some paint touch-ups.

For a limited run Action Pack made over 20 years ago, this is a really well done little set. The casting is clean and sharp, the action feature is silly but not intrusive, and the figures look good and interact with the vehicle nicely. Secondary market values have stayed pretty resonable, too, making this an easy acquisition for either Rugrats fans or more general diecast TV/movie collectors.