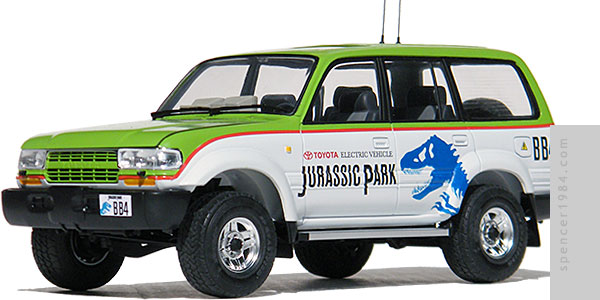 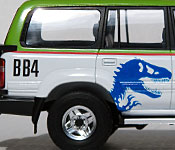 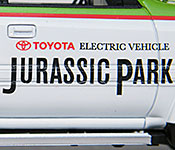 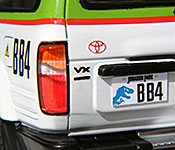 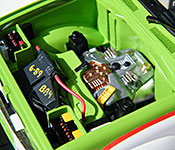 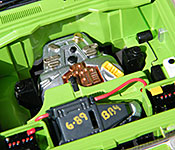 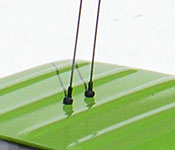 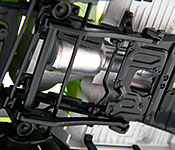 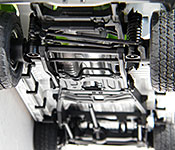 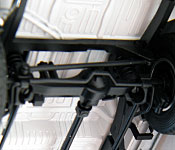 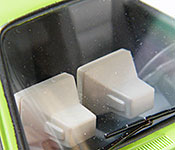 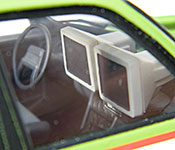 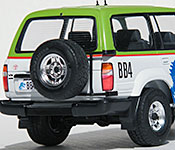 The longest part of this project was spent in the planning phase. Michael Crichton gave a pretty good description of how the Land Cruisers worked in Jurassic Park, but left out nearly all of the details about what they actually looked like. I had to combine the canon material, popular styling cues of the period, and then-current marketing and technology concepts.

I started with Tamiya's Land Cruiser 80 VX Limited. Although the story was set in 1989, Toyota was already working on their J80 (its official debut would be at the Tokyo Motor Show in October of that year), and would likely appreciate the chance to showcase their all-new design at the largest theme park in the world. Savvy as Hammond was, I'm sure he would not have minded waiting for delivery until late in the park's construction to ensure that he had the newest of the new for tour vehicles—it fits rather well with his "no expense spared" philosophy.

To backdate it from production model to prototype, I left out a few features such as the all-wheel drive system and sideview mirrors. I also used the RHD-oriented windshield wipers and raided my parts box for an older Toyota steering wheel and a generic dashboard to help sell that this was not a finished design. Omitting the gasoline engine and related system was easy thanks to the way Tamiya made the kit: the fuel tank and exhaust pipe were separate pieces, and I only needed to replace one body mount on the chassis that had been designed as a parts carrier. The electric motor and transmission were made by combining a bunch of sciencey-looking greeebles and painting them in metallic colors.

The last major detail from the book was the twin dash-mounted computer monitors and CD-ROM. The monitors were taken from a pair of Ghostbusters 2 Ecto-1A kits, which had the advantage for me of being modeled on actual computer equipment available in 1989. The CD-ROM drive was a box made from styrene and a faceplate taken from one of Detail Master's radio faces.

The only time we were given any information about the Land Cruisers' paint scheme was when Tim was climbing down the tree after the Tyrannosaur attack, at which point the "big green grille" was mentioned. I didn't want to make it solid green, nor did I want to simply apply the movie design to this and call it a day. After playing around with some different combinations, I decided that using the J80's sweeping belt line as a color break would be a good way to go. At the beginning of the tour, pith helmets were given to the guests "...with 'Jurassic Park' labeled on the headband, and a little blue dinosaur logo." I combined this with the dinosaur and text from the first edition book cover (before the circle or "safari" font were included) for the sides of the Land Cruiser. To keep things clean and vintage-appropriate, the base colors were gloss white and bright green, separated by a band of solid red. The markings were drawn up in Illustrator and printed onto clear decal stock. For the most part they worked great, though I did have to do a little paint touch-up on the dinosaur graphics thanks to the myriad curves and seams they had to cover.

Once everything was assembled, only a couple of details remained. The license plates repeated the JP text, blue dinosaur, and "BB4" designation from the sides of the Land Cruiser, an electrical warning decal was added to the fuel fill (here repurposed as the port for a recharge cord), and a pair of antenna were added to the roof.