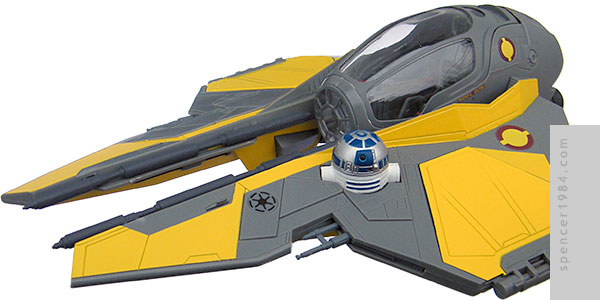 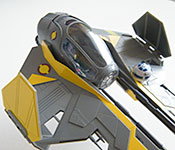 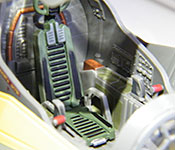 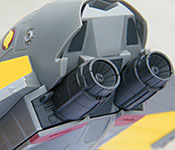 Released as part of Revell's "Easy Kit" line of Star Wars kits, Anakin's Starfighter came with all of the parts pre-painted and individually bagged. Most of it was pretty nicely done too - the paint masks were nicely lined up, coverage was good, and the smaller details like the cockpit markings were sharply defined. Assembly was as simple as advertised, with everything fitting together snugly and lining up correctly. The only time I had to use glue was in a couple of corners where I didn't like the still-visible gaps between the upper and lower hull sections.

I also had to do a little cleanup around sprue attachment points, though for the most part these were thoughtfully placed. The worst spots were on the main laser cannons, which also needed to be sanded to remove the parting seams on them, and the engine exhausts. After being cleaned up they were painted dark gray and black, respectively. Small touch-ups were also needed on the sides of the seat, forward control levers, and red panels under the engines. The edges of the radiator wings were unevenly painted, but a quick cleanup with an X-Actor blade took care of them nicely.

There is no official scale given for this kit. ScaleMates lists it at 1/30, but based on the official length of 5.47m (listed at Wookiepedia), it's actually closer to 1/27.