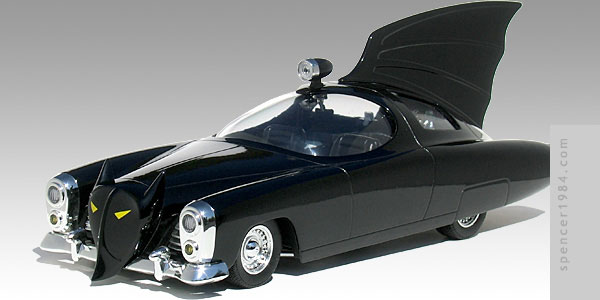 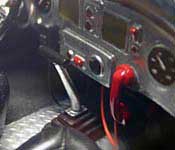 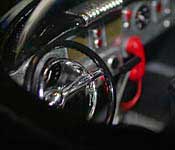 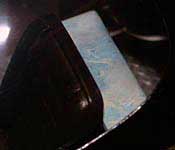 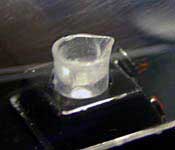 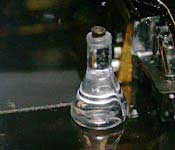 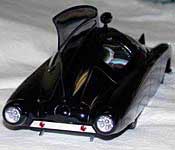 Cool Fact
During the story that introduces the 1950 Batmobile, Batman breaks his leg in the accident that destroys the old Batmobile. Unable to get into the fight himself later on, he keeps an eye on events thanks to Robin wearing a "portable" camera that's about the size of a toaster oven.

In the comics, the first generation batmobile was replaced in 1950 after being destroyed on a mission. The new Batmobile was larger, more powerful, and better equipped than the previous car, and included features like rocket thrusters, radar, and an onboard crime lab. Until Polar Lights released their diecast offering, this car was only available as a resin model. Not only is this version less expensive, it captures several features of the car (like the headlights, frameless canopy, and fin shape) even more accurately.

The quality of the kit was fantastic, so most of the work I did went into painting and detailing. One strange note, however: the chassis is in amazingly accurate replica of a late 1950s Cadillac chassis. The anachronism stems from the master (created by Mike Stutelberg) having been created from a Monogram '59 Cadillac. It does work as an inside joke, expanding on Batman's comment in the comic that the car was "ten years ahead of anything else on wheels." Still, a Cadillac would have been a good base for a 1950 Batmobile: the automaker had just introduced their powerful new overhead valve V8. I painted and detailed the chassis as if it were a Caddy item, and I added the rear suspension yoke from Monogram's '59 Cadillac.

Inside, I used custom-mixed paints for the wood cabinets and marble counter tops. The rear work surface was laminated to represent a 1:1 painted ceramic laboratory table, complete with bare metal edging. I made a couple of slight modifications to the details on the bench; the sides of the beaker were thinned down to a more realistic size, and the flask was drilled out and plugged with a rubber stopper (made from a short section of the tapered end of a toothpick). Instead of using the map, ruler, and pencil provided in the kit, I laid an anti-skid rubber pad made from a stip of electrician's tape. The dashboard was detailed with paint and Bare Metal Foil, using colors to try to replicate the "aircraft cockpit" style. I went back to Monogram's '59 Caddy for the steering wheel, and the telephone was replaced by a more accurately sized scratchbuilt part and vintage appropriate straight phone cord.

Once the interior and chassis were completed, final assembly was pretty simple as the body section needed only minimum detail work.