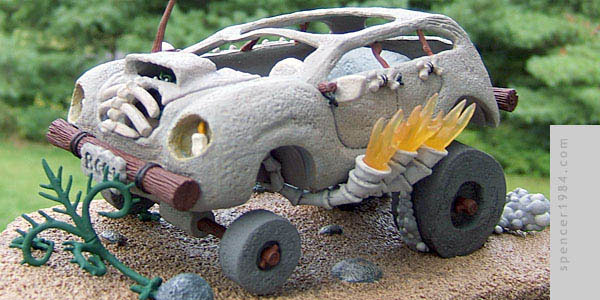 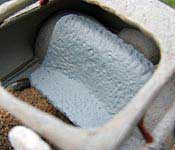 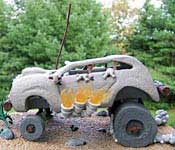 When McFarlane picked up the Hanna-Barbera license, things like excellent sculpts and some sort of big, fancy box set were givens. So as not to release all of the "standard" figures in one wave, their box set for wave 1 ended up as a bit of a fantasy design: Fred Flintstone in his "cruiser" (though "hot rod," "gasser," or "racer" all would've been more appropriate). Scale has never been McFarlane's strong suit, but sometimes that works to my advantage. In this case, it meant that Fred himself is a bit over 4" tall, but to keep the Weird-Oh/Rat Fink look, his car ended up being a nearly spot-on 1/24 scale.

When I saw it in the store, I knew it would take very little work to turn it into a cool little stand alone (as with my Danbury Mint Batmobiles, I far prefer cars without figures in them). It actually turned out to be even less work than I thought it would be. Fred is held into place with a single square peg that fits into the back of the seat, which I could simply cut with an X-Acto knife. I roughed up the remaining material to match the rest of the seat, and repainted it Flat Gull Gray. The seat doesn't match the steering wheel any more, but since it doesn't in most other cars I didn't consider this a problem. My only other modification was the removal of the "Mr. Horsepower"-inspired pteranodon from the antenna.