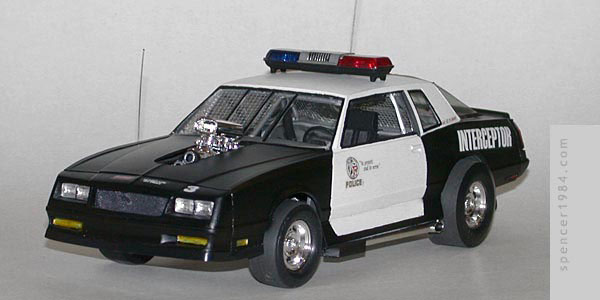 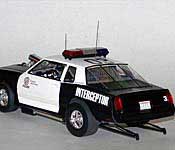 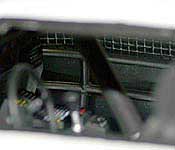 The Ford Falcon interceptors from Mad Max made me want to create an American version of the car. The natural choice for me was the late-1980s Monte Carlo SS, mainly because it was truly the last of the V8 muscle cars. I don't consider Camaros, Firebirds, or Mustangs to be "muscle cars" as much as pony cars, and the Corvette has always been a sports car. The Thunderbird and Cougar could almost be considered muscle cars when equipped with V8s, but their styling was too submissive.

With that thought, I took a stock 1986 Monte Carlo and redid the whole thing. The stock 305 was replaced with a supercharged 350 V8 with two-4bbl carburetors attached to a 5-speed NASCAR manual transmission. The chassis received a full belly pan, heavy duty suspension, added bracing, and wheelie bars.

Inside, the stock bucket was replaced with a crash cage/riot screen and a full police electronics suite complete with onboard computer and camera. The body was also heavily modified with a sharper NASCAR style nose, rocker skirts, and a new Aerocoupe style rear window. Basically, I was shooting for as powerful and impractical as possible.

The finishing touch was the traditional black and white paint job and LAPD decals from Tony Foti's LAPD Camaro. The "INTERCEPTOR" decals were custom made and printed from the computer.