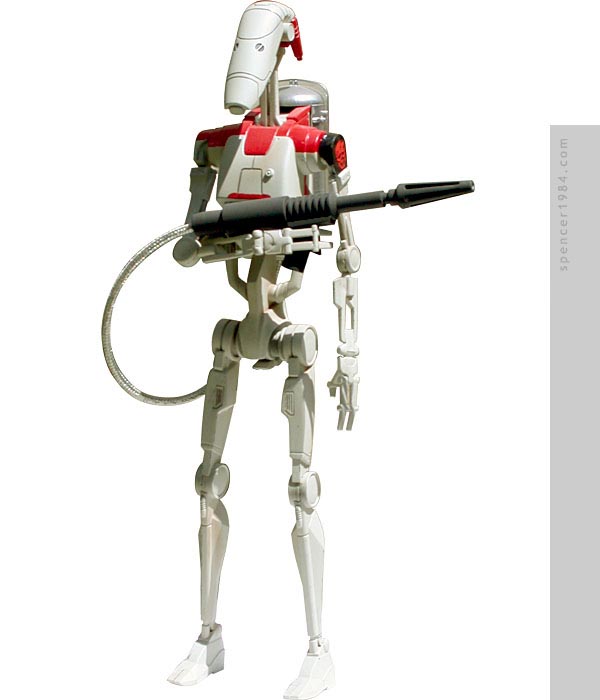 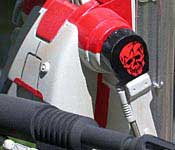 Technically, this droid did not appear anywhere in The Phantom Menace. It is based on combined resources and my own weird imagination.

If you are unfamiliar with the hierarchy of droids in Episode I, this is basically how it works:

There are four types of droids; Soldier, Officer, Pilot, and Security. They are differentiated by the color of their markings: No Marking=Soldier, Yellow=Officer, Blue=Pilot, and Red/Maroon=Security (bear with me, I am going somewhere with this). There is also a difference in the sentience of each: Soldiers are basically drones, and Security droids have the highest level of self-awareness.

The reason this all is important is because I painted this droid (mostly) with the markings of a Security droid, indicating the highest level of intelligence. But because the kit was originally a Soldier, it had some features that did not exist on the smarter droids: Soldiers are the only droids that carry backpacks, and so are the only ones that have square shoulders. Instead of modifying the shoulders, however, I chose to use them as a basis for the droid's own unique weapon. I started by shortening an HO scale railroad tanker and placing it upright on the droid's back. I then modified one of the STAP's guns into a hand held nozzle, and connected the two using a section of stripped microphone cable to simulate reinforced hose.

To finish the model, I wanted to add something that would set it apart as a Special Forces unit. For this, I painted the left shoulder black, and added a skull and crossbone in red. My reasoning is that the red markings=Security Droid=fully autonomous+black left shoulder=Special forces. My nickname for this unit is "Napalm Droid" because of it's rather nasty weapon of choice.