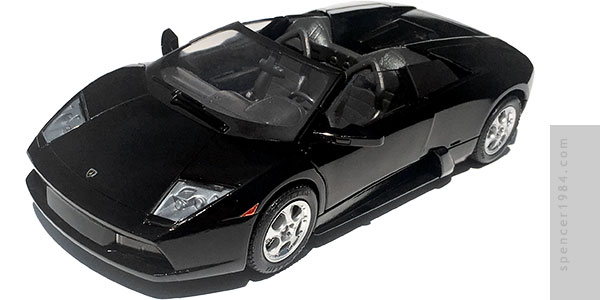 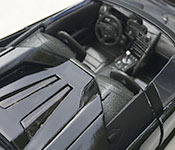 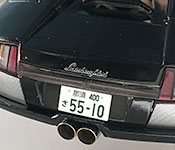 Murciélago's titular automobile was mostly a straight repaint of MotorMax's diecast. The only real modification needed was a wheel swap, since the earliest issues of the series had it wearing the earlier style. Fortunately, I had a set left over from a previous custom, so it was simply a matter of popping off the original wheels and mounting the replacements. This was made even easier thanks to MotorMax's wheel mounts having a large flanged ring, which I could flip inside out to accept Bburago's wheel stubs.

Paint was simply Krylon Gloss Black over black primer, with a coat of clear to give it some shine. The rear license plate was a custom piece I drew up based on the art in issue #1, and the emblems were from Hasegawa's Jota and aftermarket generic Lambo scripts. Lastly, I replaced the exhaust tips with a set of oversized chrome outlets. These weren't specifically from the comic (aside from the occasional artistic exaggeration), but did seem like a fitting addition to Hinako's ride.