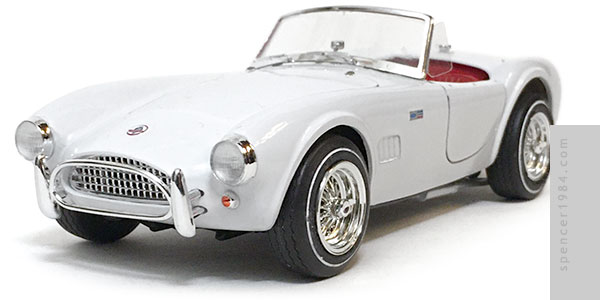 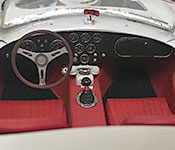 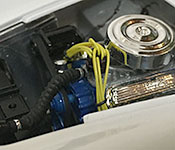 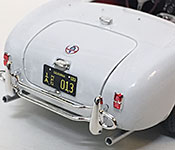 Based on the mystery novels by "G.G. Flicking" (husband and wife team Gloria and Forest Fickling), Honey West was not only one of the first female P.I.s in pop culture, she rolled into action in a British sports car much like the famous Ms. Peel. Befitting its location in southern California, though, the car of choice for Ms. West was a Ford-powered Shelby Cobra 289.

AMT's kit was a near-perfect starting point, its biggest problem was the age of the tooling and the amount of flash, ejector pin marks, and mold separation lines older kits always have. It also didn't help that the multi-piece chassis was a fiddly assembly of parts with few positive locators, making alignment more difficult than it needed to be. Patience, as well as double- and triple-checking everything, were required to get everything assembled neatly. Once the chassis was assembled, I painted everything Tamiya TS-29 Semi-Gloss Black. The wheels that came in the kit weren't quite the right style, so I swapped them for a set of wheels from AMT's '65 Riviera and parts box tires. These were a bit wider than the stock wheels, so I had to narrow both the wheels and the brake rotors so that they'd fit properly. I also replaced the rearward exhaust pipes with aluminum tubing, since the kit parts had some particularly bad seams.

Fortunately, the engine was a bit less finicky and needed only basic cleanup. It was painted Ford engine blue with a silver intake and bell housing, steel transmission, and gunmetal exhaust headers. I left the chrome valve covers and air cleaner, a bit of dress-up for the owner's expensive tastes. Basic wiring was added, and it was installed to the painted chassis along with the radiator, fan and hoses. I ran this sequence a little out of order compared to the directions, which want you to install the lower radiator hose before the engine goes into place. The aforementioned lack of good locators made this seem like a risky endeavor, and while putting them in later meant a bit more work getting around the suspension parts it did mean that I could line up everything and know that the major components would all fit together.

The interior was painted flat red, then I installed the firewall and filled the seam between it and the rest of the tub. Once the filler was done, I masked off the inside and painted the underside and firewall silver to represent the Cobra's aluminum construction. The seats were also painted flat red and hit with a light coat of gloss clear to simulate leather. I was originally going to use decals for the gauge faces, but on closer inspection I was impressed by the sharp casting. So instead, I painted the gauges and bezels with Molotow Liquid Chrome, then went back after they were dry and gave them a quick wash with a black Gundam Marker. The steering wheel looked good but had a huge sink mark right in the center, so I replaced it with a photo etched center and scratch built rim. The final detail was the phone, which was modified from a phone I found in my parts box.

Finally, the body was sanded to remove the separation lines and any low spots, I deepened the door seams, and I made fender vents from some Evergreen clapboard siding. Once the modifications were done I painted it Tamiya TS-26 Pure White. I opened up the grille for a little extra realism, but otherwise was able to use the kit-supplied trim straight out of the box. The windshield was also nicely done, but the wing windows were much too thick so I cut a new set from clear plastic sheet. The hood, trunk, and fender badges were all custom decals I made. The last detail was a custom license plate, made to match the manufacturer plate the car wore in the show.