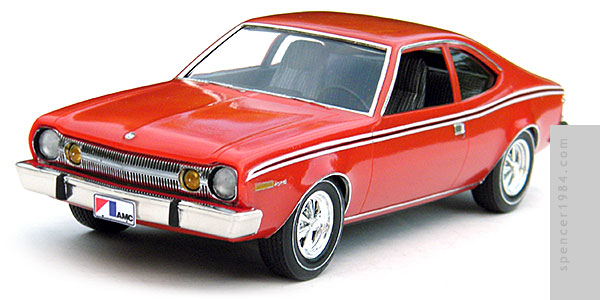 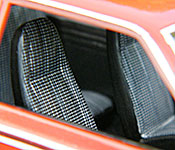 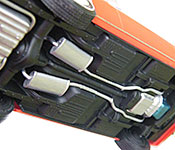 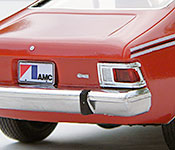 Cool Fact
The 360° jump performed by "Bumps" Willard was originally conceived at Cornell Aeronautical Laboratory (CAL) in Buffalo, New York as a test for their vehicle simulation software before being licensed to Eon Productions for use in the film.

Every once in a while, things work out nicely in this hobby. Case in point: I found this Hornet promo in the perfect condition to turn into a replica of the car from The Man with the Golden Gun. The paint and overall body were in very good condition, but the chrome plating was roughed up just enough to make it useless to collectors (and hence affordable).

Unlike other promos I've dealt with, there were no screws holding this together: it was all glue and snap assembly. Also unique was that all of the seats were cast as part of the interior tub, so there was no easy way to swap out the front bench seat. I instead had to use the cutting wheel on the Dremel tool to remove the original piece, then repair the floor using flat styrene stock. Everything was then painted satin black, and the floor was carpeted with fake suede. The front seats were the ones I couldn't use from the gluebomb that became the Wayne's World Pacer. Although they were too rough to use there, the combination of color and ugly seat pattern completely hid the damaged areas. To recreate said pattern, I painted the flat areas of the seats white and applied custom-made decals that I drew up in Illustrator and printed onto clear stock.

The chassis was painted flat black, with details in silver and AMC blue. I swapped the original promo's wheels & tires with a set of Cragars from Revell's '37 Ford and tires with gel pen whitewalls from my parts box.

Since most of the body was in excellent condition (and happened to be in the correct Trans Am Red), I wanted to avoid repainting it if at all possible. I was able to polish out all but a few very minor marks, and so I called it a win. I then repaired the chrome on the bumpers and added all of the body trim using a combination of BMF and metal repair tape. I sprayed the grille with Testor's Transparent Black Window Tint to darken the slots, painted the headlight surrounds flat black, painted the panel between the grille and bumper red, and drilled out the headlights. New lenses came from AMT's '49 Merc, which fit the buckets perfectly. The rest of the lights & trim were done with paint, and the side stripes were drawn up in Illustrator and printed by Fireball Modelworks. The final touch was a set of AMC "logo" license plates.