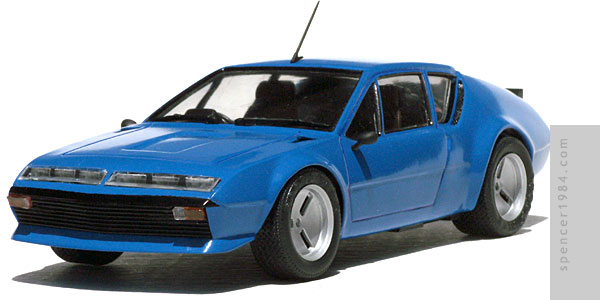 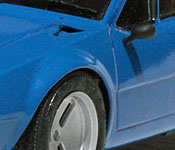 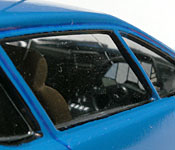 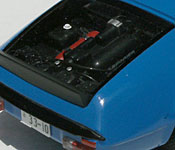 Cool Fact
The production drawings for Misato's car officailly label it as an "A310 Custom," acknowledging the alterations (both intentional and otherwise) between the actual A310 and the car that appeared on-screen.

Renault is another manufacturer who seems reluctant to license models of their cars: if it isn't an A110 or an R5, they don't want it readily available in 1/24. A few others did manage to sneak through over the years, including this model of the A310 by Heller. Unfortunately, it was an older motorized kit of the wide body...so all that was really usable was the front half of the body, the wheels, and the tail panel. But, as the only game in town, I had to make do.

The first major change was to restore the wide rear fenders back to their "stock" appearance. I did this by filling the inside of the rear fenders with Bondo glazing putty, then sanding through the outer skin and into the Bondo. The edges of the wheel arches were the only part of the original fenders that I kept, acting as a guide while I was cutting the new fenders. I also moved the hood vents back to where they were drawn on the animation model and grafted the headlight divider to the body. While most of the glass was useable, the Heller kit only had the louvered rear window panel. I made a proper rear window from 0.010" clear plastic and a scratchbuilt rear spoiler. The sideview mirrors came from Revell's Ferrari 308, and the wipers and antenna were modified parts from Revell's '59 Chevy Impala. Once the alterations were complete, I painted the body Tamiya Bright Blue with satin black details.

The interior was a complete write-off. Because it was a motorized kit, the front seats were deformed and anything behind them was totally obliterated. I couldn't even use the dashboard, since both Neon Genesis Evangelion and Evangelion: 1.0 You Are (Not) Alone used a custom right hand drive arrangement with lots of tech upgrades. The seats were modified parts from a third generation Mustang, the door panels were modified parts box items, and the dashboard was 95% scratchbuilt from sheet styrene. The steering wheel, GPS navigator, and gear selector were also modified parts box items. I painted everything to match the anime as closely as possible, though there are a few places where I had to make some educated guesses.

I also had to make up the engine bay, which lacked even basic inner fenders. I ended up using a combination of parts box items, scratchbuilt greebles, and part of a G.I. Joe engine for the primary motor. This doesn't quite match the animation model, but it fit the look & feel of the car. The chassis was modified to remove all of the stuff left over from its toy origins, then lowered slighty in the front to give it the correct stance.

I really wish a more detailed version of the A310 was available in 1/24 scale...but all in all, I don't think this came out too bad. Fortunately, a good base model is available for the car Misato drove in Evangelion: 2.0 You Can (Not) Advance, the Mazda Cosmo Sport.