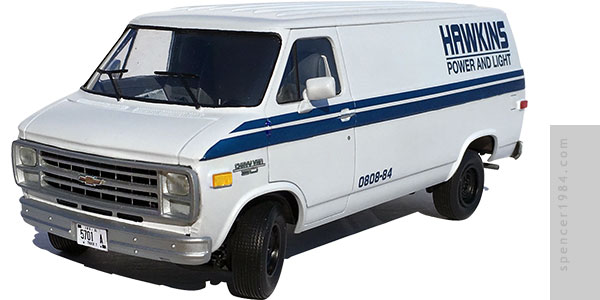 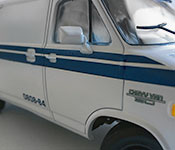 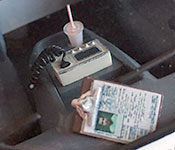 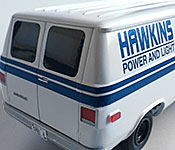 As with the A-Team van, AMT's kit provided a good base but required substantial work to get the details "just right."

In this case the chassis and engine were pretty much straight out of the box, save for some extra detailing on the exhaust and a newer fan belt assembly to represent a newer system with power steering (not that you could see much more than the bottom of the belts and accessories, but it still counts). I left off the hubcaps to match the show look, and was happy to see some pretty good detailing on the wheels. I was less happy with the steering, which as per the instructions can be posed for a more dynamic look. Unfortunately, it turns out that posing them also prevents any of the steering linkage from fitting correctly. Still, I liked the look.

The interior required a lot more work, since GM updated things substantially during that time. The stock dashboard and doghouse were used as a basis for the newer design, which was built up using styrene, metal rods, and Tamiya 2-part epoxy putty. I then carved it into the new shape, drilling holes for the gauge faces and adding PE details for the vents, radio, and comfort controls. The seats were from my parts box, the radio was from the kit, and the steering wheel was out of an early-80s Monte Carlo kit. To add a little human interest, I also put in a fast food cup and a clipboard with Eleven's info on it. This was made by searching online for a vintage official-looking document, then adding a picture of Millie Bobby Brown. The finished sheet was printed as a decal and applied to the clipboard from Revell's Caprice kit.

The body also needed a fair amount of work to update it to the correct style - more than I realized going into the project, actually. The front bumper and grille started as a resin copy of the part from the A-Team van that I got through eBay. I carved out the middle of the grille, replacing it with a new grid made from styrene and wire stock then topped with a bow tie from my parts box. I made clear resin copies of the headlights, drilled out the originals, and replaced them with my copies. All of the body trim was shaved off, and the badges were replaced with decals I made based off the newer G-30. Late model sideview mirrors came from Modelhaus. The rear bumper was originally the front bumper from an MPC Blazer, but since it had the right basic shape it just needed to have the grille guard removed and a little reshaping to look correct. The rear license plate socket was filed in with more Tamiya putty. Roof ribs were made from half round styrene stock, cut and tapered at both ends then arranged and glued down using the A-Team Vandura as a guide.

Once all the modifications were done, the van was painted Tamiya Pure White and decorated with a set of custom decals I drew up in Illustrator.