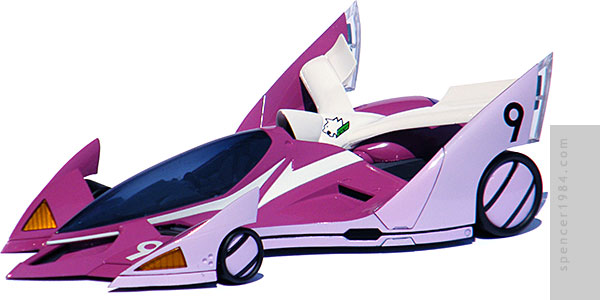 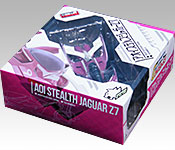 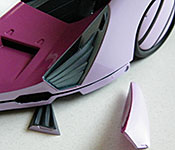 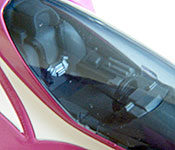 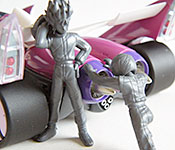 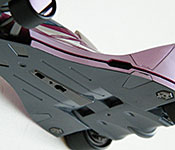 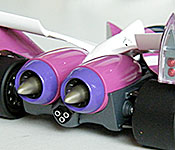 In the far-off future of 2015, artificially intelligent computers called "Cyber Systems" have been installed in Formula racers to help improve racers' abilities and reduce accidents on the track. Bleed Kaga befriends the series' protagonist Hayato Kazami on the highway, and uses the skills he developed racing on the fringes to help Kazami become a better driver. Their friendship turns to rivalry when Kaga joins the Aoi ZIP Formula team after their primary driver Naoki Shinjyo fails to live up to his reputation. Kaga's car in the 2015 season is the Stealth Jaguar Z-7, which he intentionally wrecks near the end of the final race after being offered a bribe from team owner Kyoko Aoi.

The package is a square cardboaard box, approximately 10¾" (27cm) on a side and 4" (10cm) deep. The window is an irregular diagonal slash across the top and opposing end panels, with a large portrait of the Stealth Jaguar and its logo on one side of the window and the name, stats, and "Variable Action" logo on the other. The text and photos are oriented in such a way that there is no "front." One of the side panels with the window continues the portrait of the car and repeats the Aoi logo and stats, while the other one has the series' logo, stats, and Mega House/Sunrise logos. These panels are all printed in a light pink that matches the sides of the Stealth Jaguar. The other two side panels are darker to reflect the top of Kaga's car, and have line art and full detail drawings of the Stealth Jaguar under its name and stats. The bottom has multiple photographs of the model along with detailed views and descriptions of its features. It also has all of the legal and contact info. Inside, the car is sandwiched between two clear plastic trays and a printed background that mimics the starting grid of a race course (with painted numbers on the pavement). The trays are taped together, but nest so securely that the car and accessories can be repackaged easily. A sheet of soft plastic further protects the Stealth Jaguar's paint, and it is placed in the tray on a gray display base that includes the car name, driver, and number printed in white. The base and car are keyed to each other, but not fastened together (a small screw is provided in a separate baggie for those that wish to do so). A solid gray figure of Bleed Kaga is in a separate depression in the lower tray, and is packed next to a base to help keep him standing. A second figure of Naoki Shinjyo is packed in a plastic baggie taped under the trays. Shinjyo is posed to go with Mega House's earlier Fire Superion model, to reflect the scene where Shinjyo pushes the disabled car across the finish line. Finally, another baggie is included that has the panels to cover the access ports on the underside of the Stealth Jaguar. There are two of each, just in case you drop one. Overall this is fantastic packaging: it looks good, protects the car and accessories, displays nicely, and is easy to open and re-seal for storage.

Excellent work across the board. The body is made of plastic, and is rendered with all of the sharpness and detail you could hope for. Curves are smooth and graceful, edges are sharply defines, and the panels fit together beautifully. The only flaws are the seam running down the dorsal edge of the main engine scoop, the horizontal seam around the forward part of the boost engines, and a slightly rough edge separating the scoop and boosters. The four triangular headlights are cast in transparent amber, the canopy is cast in transparent smoke, and the taillights are cast in clear plastic. The two-tone body is split sharply along the edges of the fenders, with a white stripe painted under the canopy. White paint has also been applied to the booster scoop and attached wing. Black paint is used for the recess under the canopy's nose, tires, wheel stripes, engine intakes, axle boots, and area surrounding the exhaust pipes. Gunmetal is used for the suspension, chassis details, and engine internals. The exhaust bezels are purple. The rear view mirrors (on the trailing edge of the front fins), exhaust tips, booster intakes, and driveshafts are silver. The main part of the chassis is dark gray, and the cockpit appears to be a matte version of the same color. Aoi's Jaguar is printed on both sides of the engine intake. There are three #9's on the car: printed in white on the front splitter, and in black on each of the rear fins. All of the paint is outstanding, with sharp edges and flawless coverage. There are no signs of ghosting, fuzzy edges, or bleed, and only the closest examination reveals a few feathers in the break between the two main colors.

1/24 scale soft vinyl figures of Bleed Kaga and Naoki Shinjyo are included, and have surprisingly good detail considering the material. The base is matte black with sharp white lettering and beveled edges, and like the car the printing is sharp and has no problem with opacity. The Stealth Jaguar itself converts from race mode to boost mode by raising the rear section of the car. It's not a huge change, but it is clever in its execution: as the boosters, central scoop, and wings raise, the tailshafts retract into the boosters. It's subtle, but a neat touch. Finally, there are four panels near the base of the rear wings that can be removed: one ventral and one dorsal on each side. Taking them off exposes miscellaneous tech greebles that look good if nonspecific in function.

Given the animation style (and limitations) when Future GPX Cyber Formula came out, this looks far more intricate than the animation model ever did. That said, it is an excellent "real world" interpretation of the Stealth Jaguar, from the overall shape to the boost mode conversion. The extra detailing further enhances the look, befitting the "enhanced Formula racer" aesthetic. Scaling is a little tough to pin down, but it looks accurate next to other Formula racers so we'll call it good.

Mega House hit this one out of the park. The sculpting is fantastic, the paint is nearly flawless, the features and accessories are nice additions without negatively effecting the car...this hits all of the high points. Even if you're not a fan of Future GPX Cyber Formula, the design is cool enough that it deserves a place in your 1:24 scale TV/movie collection. Very highly recommended.