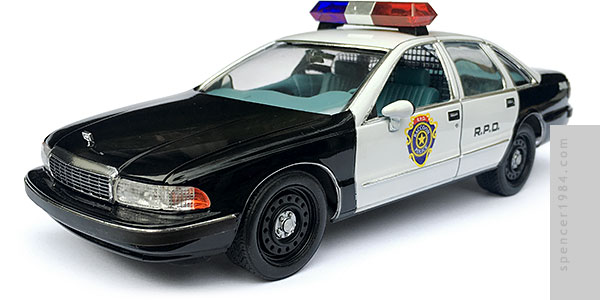 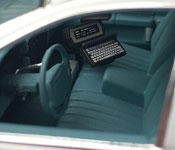 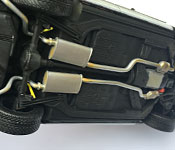 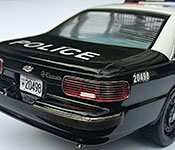 There wasn't really any actual vehicular action in Resident Evil, but as much as I enjoyed the movie (and subsequent series) I really wanted to have a representative of the film in my collection. I decided to go with one of the Raccoon City police cars shown in the film's final scene where Alice is searching the now-destroyed city for a weapon. The clearest car was a '94 Caprice shown just as the the final zoom out begins, which meant I'd be combining Revell's Caprice and Impala SS kits.

The engine and chassis were straight out of the Impala SS, which was correct for the 9C1 Police package. I added plenty of heat discoloration on the exhausts and some general weathering to indicate its eight years of service. The wheels were taken from a Maisto diecast Impala police car, and after removing the axle mounts and doing a little trimming fit perfectly over the kit's inner wheels. This not only helped keep them located properly, but allowed me to leave the wheels able to spin.

I didn't want to use the interior out of the Impala SS since it had the leather bucket seats, so I swapped the front seat and bucket from the Caprice while keeping the later style door panels and dashboard. Everything was painted Krylon Bahama Sea, which looked like a pretty good match for one of the stock Caprice interior colors, and then detailed with flat black and more light weathering. I used the MDT from the Caprice kit, which was dated by 2002 standards but I figured since the car itself was an older model it wouldn't have received a newer computer. I did update the radio, though, using one from my parts box. Since I used the rear windows from the Caprice, I was able to use the divider screen without modification.

The 1994 Caprice was another transition year, making it a mix of styles. I started with the Impala SS body even though it meant I'd have to fill in the rear spoiler indentation and cut out the side windows, because it had the correct radiused rear wheel openings. The spoiler was filled with a bead of Tamiya 2-part putty carved to match the original trunk line. The side windows were easier than expected thanks to the ghost lines on the inside left over from where Revell modified the mold. They made knowing where to cut to a cinch, then it was just a matter of filling the small gaps in the trim around the window. The hood, grille, and Chevrolet badges were taken from the Caprice kit. The light bar was taken from a MotorMax Crown Victoria, and colored exactly like I did for the Piranha 3D cruiser.

Once the body mods were done, I painted the car Tamiya Black and Pure White. Trim was done with BMF and Molotow Liquid Chrome. The decals are a mix of my own custom badges and some more generic markings I got through eBay, including a small chrome "Umbrella" badge for the trunk lid.