The customs on this page are here because they didn't really fit anywhere else; vinyl figures, Micro Machine repaints, and other "small scale" projects that usually took less than an hour to complete. 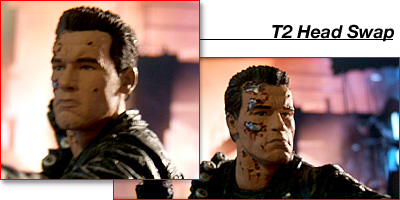 Back in late 2001, McFarlane released the first of their Terminator figures. Unfortunately, due to licensing issues, Schwarzenegger's face was completely obliterated and we were left with a great figure sporting a hamburger head. Fast forward about eight years, and NECA released a "final battle" Terminator featuring swappable heads. Both heads were appropriate to the scenes depicted by the rest of the figure: one with an exposed right eye and more substantial damage from near the end of the film, and the other from slightly earlier in the movie...which also included the scene depicted by that original McFarlane figure. All I had to do was break off the original McFarlane head and pop the new one into the opening. It's not articulated any more, but the new head fits the opening so perfectly I didn't have to use any glue at all (almost as if it had been planned that way). 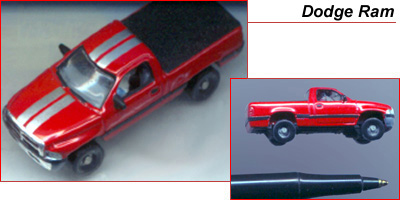 A while ago, I was struck with the urge to create an N-scale diorama. I still have not finished it (though I intend to), but I did mange to finish some of the component vehicles. For this one, I left most of the body alone, concentrating more on detailing it than modifying it. I painted the chassis, interior, and glass trim, and made beltline trim from thin strips of vinyl tape. The bumper face was chrome plated using metal tape, and the rest of it was painted satin gray. Beacause of the nature of the project (being part of a diorama), I also included people. Both the driver and passenger are N-scale townfolk, cut to fit inside the Ram's cab. With the people inside, though, the plastic connecting the windshield and rear window prevented the interior from going in all the way. I fixed that by simply cutting out that section of plastic and gluing the glass in place. The above picture shows a size comparison between the truck and a regular ballpoint pen. 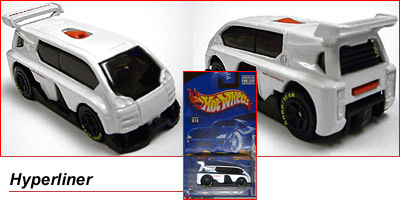 Hyperliner was my first "carded" custom. I tried to make it look as much like an authentic variant as I could, even making my own properly sized Hot Wheels logo to go on the tailgate. Decals came from a 1/24 Beetle kit, and one complete the car was re-sealed on it's original card. 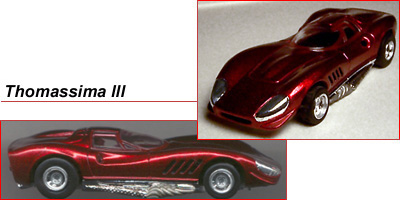 The original car is from Hot Wheels, designed by Tom Meade for the 2000 FE cars. Modifications to the car are mild, as I thought it was excellent looking right from the package. The first thing I did was replace the wheels with a set of chrome 5-lug rims and tires from Johnny Lightning's Buick Grand National. I also replaced the garbage-can-lid steering wheel with something more appropriate, and then painted details inside and out. Other details on the car include a mesh grille, steel colored exhaust headers, and foil covered headlights. 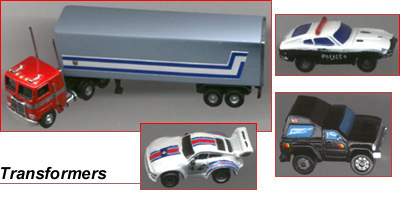 Not part of any series or project that I'm working on, but I had some extra time (waiting for other project to dry) and some extra Micro Machines leftover from the sets I bought for my N-scale diorama (still not finished...).

The Prime rig started as a Racing Champions 1/144 scale Kenworth. I know Prime looked more like a Kenworth in the cartoon, but as a toy he was a Freightliner, so that's what he'll always be to me. I filed off the grill, side ladders, and two of the four grab rails, and replaced them with scratchbuilt parts. I also added the windshield post and replaced the exhaust pipes and front wheels with more appropriate parts. The cab was then painted gloss red and silver. The trailer was shortened about 20' (6.15 meters). No, that's not a typo, the trailers Racing Champions put with their 1/144 scale rigs were ridiculously long. The trailer's fenders were also modified, and it was painted gray with custom stickers.

Jazz was quite a bit easier - just a simple repaint with wheels from a Hot Wheels Micro Universe set.

Prowl had the fender arches on both the front and rear fenders contracted about 3 scale inches, and the light bar is scratch built. Wheels for this one came from a Racing Champions 1/144 Stock Car.

Trailbreaker started out as a pickup/fire truck. I removed the brush guard and ladder rack, and scratchbuilt the cap from sheet styrene. The windows were made by bending wire into the correct shapes and molding them into the body. 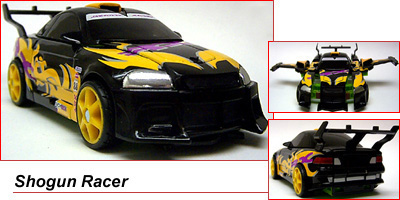 I was really impressed with Hot Wheels "Shogun Racer" series from the first time I saw them. Between the aggressive car designs and intricate clocklike workings of their transformation, these were some very cool vehicles.

If you are unfamiliar with this series, they get the name "Morphing Tuners" from the fact that when you push down on the roof scoop, each car goes through a 3-5 second transformation that turns them from street racers into sea, air, or snow vehicles. There were six cars total, two variants of each design.

This represents one of the two "Air" variants. I did very little modification work to it, concentrating instead on detailing what was already there. Some of the details include the addition of mesh to the grill openings, Bare Metal Foil to the headlights, and painting the taillights. Decals and detail painting finished off the racer, which is still fully functional. 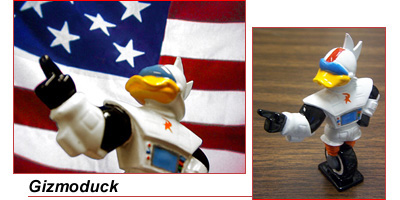 For a while back in the early 1990s, Kelloggs was including various characters from the "Disney Afternoon" cartoon block in their cereals, and Gizmo here was one of those figures. Unfortunately, like most of the other PVC figs, he was cast in a colossally ridiculous pose. There wasn't much I could do about the overall pose, but I did correct a couple of other small problem areas.

I removed the huge seam lines that ran up both sides of the body, and cleaned up the panel lines some. The fins on his head had been chewed up, so I cut those off altogether and made a new set out of sheet styrene. Finally, I reshaped his eyepiece into something that more closely resembled his design from the cartoon. When my mods were done, I repainted the whole figure using screenshots from the cartoon to get the colors and design accurate.