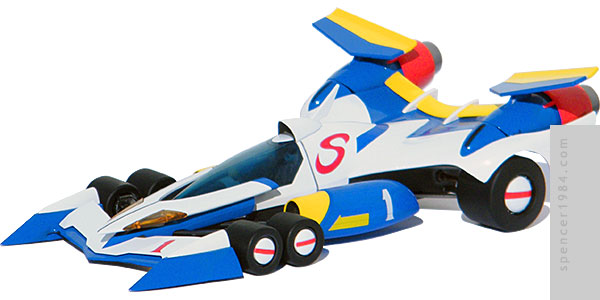 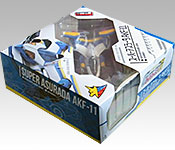 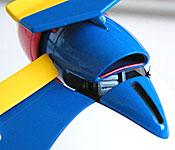 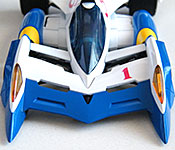 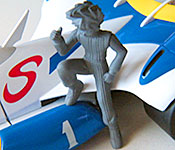 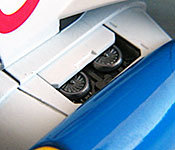 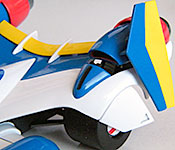 In the far-off future of 2015, artificially intelligent computers called "Cyber Systems" have been installed in Formula racers to help improve racers' abilities and reduce accidents on the track. One of these is Asurada, a cutting-edge system designed by the Sugo Corporation. First installed in the G.S.X. then later the AKF-11, a dedicated and more powerful single-seat racer.

The package is a square cardboard box, approximately 10¾" (27cm) on a side and 4" (10cm) deep. The window is an irregular diagonal slash across the top and opposing end panels, with a large portrait of the AKF-11 and Sugo logo on one side of the window and the name, stats, and "Variable Action" logo on the other. The text and photos are oriented in such a way that there is no "front." One of the side panels with the window continues the portrait of the car and repeats the Sugo logo and stats, while the other one has the series' logo, stats, and Mega House/Sunrise logos. These panels are all printed in blue and white to match the AKF-11. The other two side panels are solid blue, and have line art and full detail drawings of the AKF-11 under its name and stats. The bottom has multiple photographs of the model along with detailed views and descriptions of its features. It also has all of the legal and contact info. Inside, the car is sandwiched between two clear plastic trays and a printed background that mimics a garage or pit stall (with doors around the sides and what appears to be a circular lift centered under the car). The trays are taped together, but nest so securely that the car and accessories can be repackaged easily. A sheet of soft plastic further protects the AKF-11's paint, with two strips of the same soft plastic sheet wrapped around the rear engine. It is placed in the tray on a gray display base that includes the car name, driver, and number printed in white. The base and car are keyed to each other, but not fastened together (a small screw is provided in a separate baggie for those that wish to do so). An unpainted gray figure of Hayato Kazami is secured by an indentation in the lower tray near the front of the car. The optional parts to create the boost mode—nose, rear engines, and rear fender skirts—are packaged in individual divots on either side of the car. Overall this is fantastic packaging: it looks good, protects the car and accessories, displays nicely, and is easy to open and re-seal for storage.

Taken on its own, the AKF-11 is solid, arguably excellent work. The complex curves of the body, the smooth transition between panels, and the overall fit and finish look great. Compared to their Stealth Jaguar (the current high water mark in this series), there are a few minor flaws: a rough sprue removal point at the tip of the port wing; a small smear of glue just behind the front set of wheels; visible casting marks on the tires. Detail work is still very good, with intricate components like the multi-piece suspension and the waist-mounted lift fans executed beautifully. Transparent yellow used for the headlights (both modes), transparent blue used for the canopy, and transparent red used for the taillight. As with the GSX, The AKF-11 wears the Team Sugo colors of white and blue with a few red highlights. Yellow has also been added to the mix, including the side intakes and stripes along the sides and across the rear spoiler/wings. A red #1 is printed on the forward wing, a white #1 is printed on the side pods, and a stylized red "S" is printed on each side of the car's waist just behind the canopy. Black is used for detail work on the side pods and rear thrusters, and the sideview mirrors are painted silver. Being a dedicated racing machine, the chassis is a simple design painted flat black with metallic suspension and drivetrain components. The interior is a sealed canopy, but you can still see some nice detail work in there such as the racing seat and hubless steering wheel.

For the first time in the Cyber Formula series, Mega House makes you disassemble parts of the AKF-11 to convert it from standard to boost mode. To be fair, the show used animation magic to allow the car to shift...so I can't really fault them for going this route. The two noses swap easily, snapping into the sides of the fuselage on either side of the canopy and locating to a pin at the forward tip of the chassis. The rear thrusters slide up on shafts mounted to the rear fenders. To change these, keep pulling until it feels like something is about to break, then give it one more tug. The locks at the top of the shafts are great for holding both sets of engines on, but make swapping them difficult. The side skirts simply snap into keyed grooves inside the rear fender lips, and seem to hold with no problem. The side lift fans are accessed by pulling the side pods straight out from the body, then sliding the doors back to reveal the fans. These extra doors are unnecessary, but work well and look great. Finally, a 1/24 scale vinyl figure of Hayato Kazami is included. This figure is helmetless, and posed with one foot up and giving a "thumbs up" gesture.

The detachable parts allow you to accurately depict whichever mode you prefer, or you can mix & match to give it a bit of a "pit stop repair" look. Scaling remains consistent with their other Future GPX Cyber Formula releases.

Not quite as good as the best in the series, but a very worthy addition to the line and it looks great as part of Mega House's growing starting grid. As on of the series' "hero cars," it's one that you're definitely going to want to pick up.