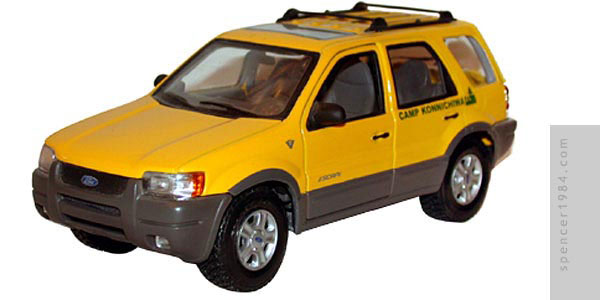 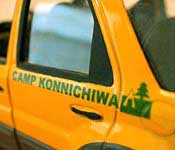 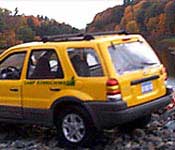 This model was an odd combination of inspiration, fate, and time of year. Like the Teledyne BMW, the decals came before the rest of the kit - in this case, the camp logo is the letter "Q" in the Webdings font, and the name "Camp Konnichiwa" is my twist on more traditional camp names (Konnichiwa is Japanese for "hello", but the joke makes less sense since I ended up using the decals on an American SUV).

The fate part came in when I found this model of the Escape (the last one) at Kay-Bee Toy store on an out-of-state trip. I thought it was perfect for the application, even the bright yellow seemed appropriate for a camp's runabout car. The time of year aspect is hopefully evident by the photo; I wanted to have the scene set sometime in autumn, when the trees are turning color and summer camps are doing their final preparations for winter.

Since I was on a tight schedule, all of the work here went into detailing the existing kit instead of trying to redo the whole thing. The only major work I did to the body was straightening the badly twisted tailgate so that it could actually close. Otherwise, I painted the body trim, interior details, and chassis, and touched up the rockers and tail lights. The lights were all foil-backed, and the two lower grills had screens added to them. Once assembled, the whole thing received a light weathering and detailing.