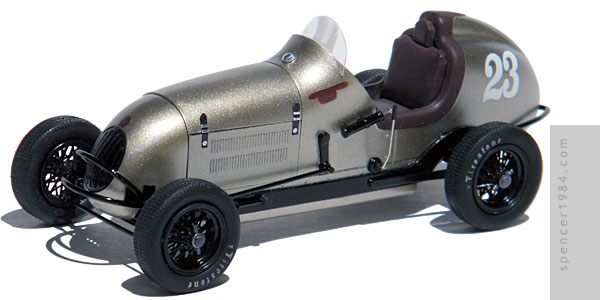 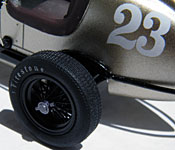 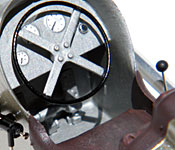 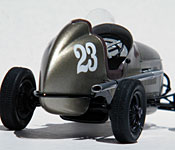 I had to turn to the guys on the Scale Auto forum for help sourcing this one. I knew of several vintage open-wheeled racer kits in 1/24, but none of them matched the style that was shown in the movie. Fortunately the other members did: they suggested I get one of the old Monogram midget racers. This model was larger than the more recent Revell kits, and so translated pretty well into full-sized Kurtis racer in 1/25 scale. Plus, although it was originally run back in the 1950s, the kit had been reissued enough times to make it relatively easy to find one.

Considering its age, the tooling has held up very well. Everything that I needed fit together with no problems (I did not use the driver, engine, bumpers, wheels, or suspension), and there was surprisingly little flash. I started by gluing the two main body halves together, then filling & smoothing the seam down the middle. The hood was also sanded smooth, and I made new side for it from styrene sheet stock. To recreate the louvers on the sides of the hood, I tried using Archer's O-gauge 6" louvers and found them to work perfectly. Archer prints resin detailing onto waterslide decal stock, so they just needed to be cut to size and applied just like any other decal. Then everything was painted with Model Master's Champagne Gold and detailed with custom-printed number decals and scratchbuilt hood ties.

Since there was no way to fake the oversized engine, and because it had full sides and a belly pan, I opted to leave out the engine entirely. Instead, the exhaust header goes through an oblong hole cut in the right side panel and is cemented to a half pipe made from styrene tubing. By painting the inside of the curve black, looking through the opening around the header gives a sense of depth without betraying the empty engine bay. The pipe itself is straight out of the kit, drilled out and painted with Model Master's Buffing Metalizer Stainless Steel.

Chassis rails were added to the sides of the body with sheet styrene. The front swing arms are modified kit components while the rest of the suspension and drivetrain was modified from an AMT 1932 Ford. The grille was modified to remove the mount hole for the front bumper, and both bumpers were scratch built from metal rod and styrene. These components were all painted gloss black.

I had originally purchased a set of wheels and tires from K≈R Replicas, but once I got the first one assembled I did not like the way they fit the car. I needed something a little bigger in diameter, and so I went instead with Fujimi wheels like I used on my 1964 Batmobile. They needed to be narrowed, stripped of their chrome plating, and painted, but the end result was well worth it. I was able to use the K&R tires, which fit nicely over the modified Fujimi wheels. The center knockoffs were scratch built from styrene rod & tube stock.

Without the driver, I had to make a new cockpit. The floor and firewall were made from sheet styrene and painted flat steel. The seat was made from masking tape, which was textured almost exactly like the cast-in padding around the cockpit opening. Anything that was "leather" was painted with a custom mixed reddish-brown. The steering wheel is a wire rim bent around the kit's spokes, the pedals came from a Batmobile model, and the levers were all scratch built from straight pins and styrene.

The final two details were the fuel cap and the windshield, both of which were scratch built. A light weathering was applied and the Blonde Comet racer was ready to go.