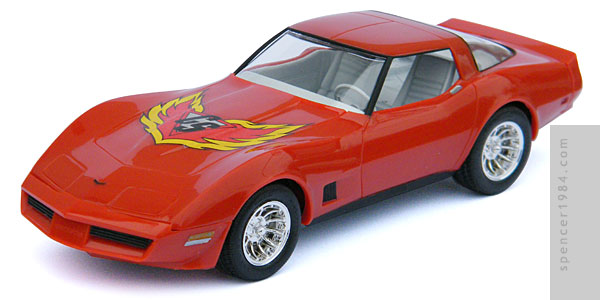 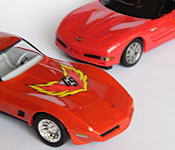 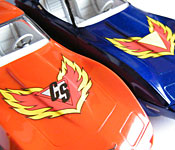 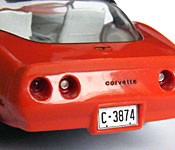 Cool Fact
Road Rage and Crosscut were the first new characters added to the G1 cast since the conclusion of Machine Wars in 1997.

While I was redoing Tracks, I decided to print out an extra hood flame decal to use for his "sister" Road Rage. But I wanted to differentiate her even further from blue boy, so this hood flame was made to match the Diaclone design with the "CS" ("Corvette Stingray") and silver/red triangle. Otherwise, it and its application were done exactly as I did for Tracks, with an opaque base cut from white decal stock before I applied the color graphic. I was able to skip painting the body since it was already cast in a near-perfect red, but the interior and chassis were painted white and black, respectively. I also repeated the wheel swap from Monoram's '56 Chevy to give Road Rage the toy's 12-spoke wheels, then finished the model with a Diaclone-inspired "C-3874" license plate.