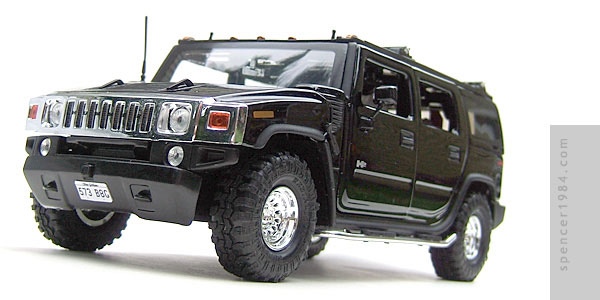 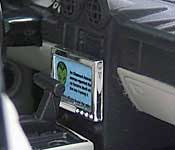 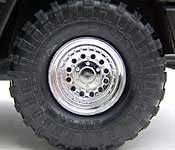 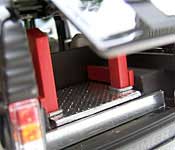 Cool Fact
Birds of Prey was considered an unlikely DVD release for years due to costs for licensing the music used in the show.
Source: Transcript of chat with Warner Brothers

I've wanted to build a replica of Oracle's H2 since it rolled onto the screen the day before Halloween 2002. By that point, the show was starting to find its groove and I was a regular viewer. Unfortunately, the show's days were already numbered and the Hummer did not make a return appearance. After the show was cancelled, I knew I wasn't going to be able to count on a rerun - but I was hoping for a DVD release. Alas, that was not to be, either. Thanks to the miracle of the internet, however, I was able to get enough information to finally get this one finished and added to my collection.

When I first started this project, options for an H2 base vehicle were in short supply. Basically, I had my choice of a diecast from Maisto or Jada. The Maisto diecast had the advantage of being factory stock, but it was a smaller 1/27 scale and didn't have an opening hood, doors, or tailgate. The Jada had all of these and was an accurate 1/24, but had low profile tires and a huge A/V system in the back. Still, I liked the detail on it a bit better and so went to work.

Once disassembled, the rear cargo area was gutted to make room for a scratchbuilt wheelchair lift. I considered making it functional, but the liftgate didn't open wide enough and I didn't want to fabricate all-new hinges as well. So I settled for a reasonable representation of a lift in the "driving" position. I also repainted and detailed the interior, while keeping some of the add-ons that Jada included. For example, I kept the monitor on the dashboard, but made a new screen to indicate that it was for Oracle's computer instead of a DVD player. I also replaced the wheels & tires with a set of chrome wheels and Super Swampers from Aoshima's Toyota Hilux. They fit the look of the Hummer perfectly, and only needed a bit of tweaking to get the ride height where I wanted it. Once the modifications were complete, the SUV was reassembled and a set of show-accurate license plates were added (they, and the make/model/color, were the only things that were shown on-screen, so I hada great deal of freedom to personalize Babs' ride of choice).