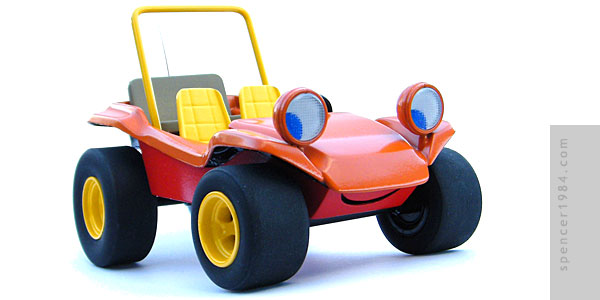 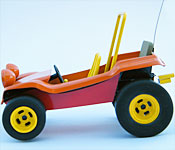 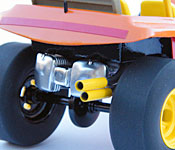 Cool Fact
Speedy is one of the most sociable Hanna-Barbera characters, having guest-starred or made cameo appearances in Scooby-Doo, Animaniacs, Stroker and Hoop, Johnny Bravo, Invader Zim, Harvey Birdman: Attorney at Law, and South Park.

Jimmy Flintstone's Meyers was a little rough right out of the box, but was a pretty good match to Speedy. The hood needed to be rounded off, and the rear had to be filled and smoothed over. I used headlights from a diecast Mercedes SSK, which had the right oversized look I needed for Speed Buggy's eyes. The taillight was a strip of reflective safety tape cut to fit the revised rear panel.

The chassis was scratchbuilt from sheet styrene, which let me cut out the mouth easily. The front axle is a half section of tubing, and the rear axle is round stock with a differential made from two LEGO 2x2 dishes. Tires are from my parts box, mounted on wheels from AMT's Deora (the rear wheels had to be sleeved so that they could fit the larger tires).

The animation model for Speedy didn't have an engine, just a set of exhaust pipes that disappeared somewhere around the rear axle. I've seen a few possibilities by other modelers, but decided to do something a little different. I started with the engine from a 1/18 scale Harley-Davidson, which I cleaned up and rotated so that the cylinders were pointing rearward. After lots of test fitting and some work with the Dremel, I was able to get it to fit both the body and the differential. I then made the exhaust pipes from solder with aluminum tubing for the tailpipes.

My last task was the interior, which I made from sheet styrene, brass rod, and a parts box steering wheel. The front seats were modified from the A-Team van, and the rear seat is from AMT's Jeep.

I tried to recreate his animated color scheme as much as possible, using glossy bold colors. The main body is Krylon Pumpkin Orange, with a darker orange for the chassis and black for the underside of the body and axles. The wheels, tailpipes, and roll bar are Rustoleum Sun Yellow, and the seats are Pactra Daytona Yellow and Model Master SAC Bomber Tan. The final touch was the giant whip antenna, made from a length of guitar wire.