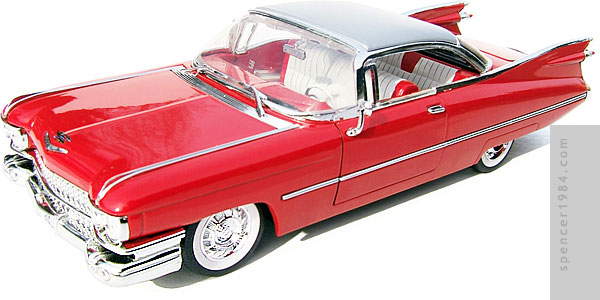 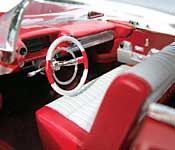 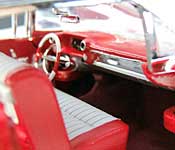 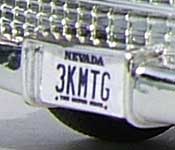 Cool Fact
"The Road to Graceland" was the first time a major film's cast members performed for internet-only content to promote the movie.

Locating this particular model was actually far easier than I expected - though it took me a few tries to realize it. Years ago, I had built one of Monogram's '59 Cadillac Eldorado convertibles, and I knew that at some point they had released a hardtop version of the same kit. Unfortunately, the basic sheetmetal is all that the Eldorado and Coupe DeVille share - the trim and interiors are completely different. So I resigned myself to doing a conversion, and added one of those to my "wanted kits" list. Then one day I was flipping through a Danbury Mint catalog, and saw an entry for a '59 Coupe DeVille HT. Beautiful, but the wrong color and a bit pricey for a 3KMTG repaint. Scratch the Monogram kit, but add this one with a note about finding one for cheap...maybe a scratch & dent special. I checked eBay to see what the secondary market values are, and although I could get the Caddy cheaper online than I could direct from Danbury, they were still too expensive. This search led to another possibility, though - Jada's '59 Cadillac was also a Coupe De Ville, and it even came in red! I have seen this car dozens of times over the years since it was first released, but never realized which exact model it represented.

The wheels were no good, but my parts box was able to provide both stock Cadillac hubcaps and a good set of whitewall tires. All that was left at this point was repainting the interior (Testor's red over Rustoleum white), engine (flat black, gloss black, silver, and dark blue), and roof (Tamiya Silver Leaf), which was done in a couple of afternoons between other tasks. A set of screen-accurate license plates finished it off, and I now had a good representation of the movie car to add to my collection.