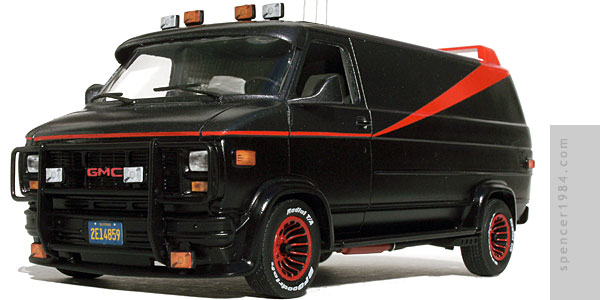 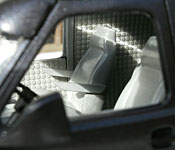 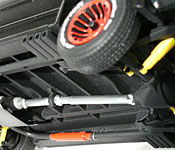 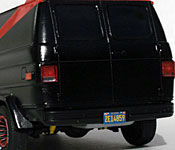 Cool Fact
Whenever the van had to do a particularly destructive stunt, alternate makes and models - including a Ford Econoline in at least one case - would be used as stand-ins.

Although not a bad kit, this needed a lot of work to get close to matching the van from the TV show. The body was the closest thing to "screen accurate," and even that needed some work.

First, I tossed the kit-supplied seats. Not only were they terrible looking, there were only two of them - where are Face and Murdock supposed to sit? So instead, I used seats from two Revell Camaro kits. These looked the parts, and I could get a matching set of four. Some armrests and parts box stands finished these off. Next, I covered the inside of the van with Plastruct Rubber Tread to replicate the textured material used on the show, and made proper "B" pillars and rear cabinet walls to give it a little more depth. Finally, I replaced the steering wheel with a parts box item to match the prototype.

The chassis needed less work than the interior, but there was still room for improvement. I moved the rear axle back and raised it to provide the proper stance, then replaced the kit-supplied Good Years with a set of big-n-little BF Goodrich tires with decals by Scale Equipment Ltd. The exhaust system was a stock single pipe, so I replaced that with a set of dual pipes, Cherry Bomb mufflers, and scratchbuilt "box" quad pipes made to match the show. I also scratchbuilt a set of heavy duty shocks (with doubles in the back), beefed up the springs, added traction bars, and made a set of skid plates to protect the bottom of the engine and transmission. None of these were shown in the series, but they all seemed appropriate given the high-speed maneuvering and excessive jumping BA did.

For the most part, the extras AMT included with the kit did a good job of matching the body modifications. The only change I made was on the rear doors, where I added a set of windows by making frames from 0.010" round stock. Everything else here is box stock.

Paint was Tamiya gunmetal and red over Testors Flat black. Glosscote brought it up to a good satin finish, with lots of details - such as the wheel ribs and GMC logo - painted by hand. I made the lights by printing various lenses onto photo paper and gluing them over the molded-in components. This provides a pretty realistic look, far better than simply painting the lights. I took the rear lights from Revell's van kit, which were cast in clear and thus let me leave the reverse lights "white." A set of roof antennas and screen-accurate "2E14859" license plates finished it off.