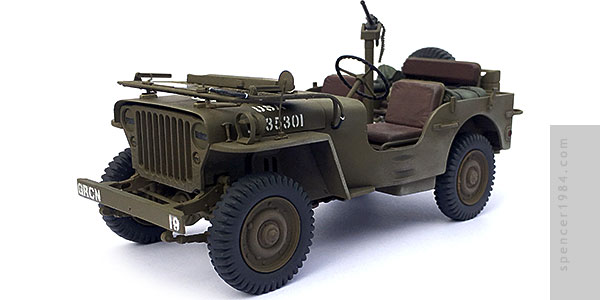 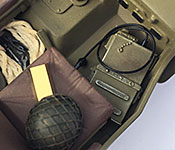 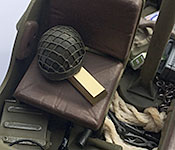 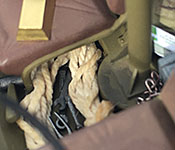 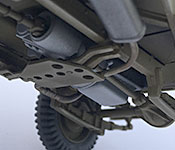 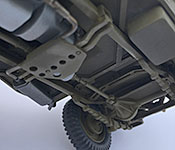 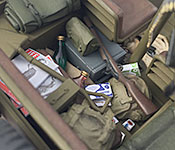 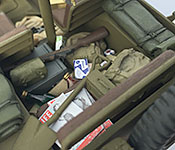 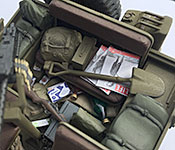 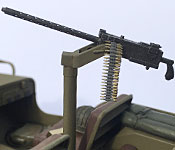 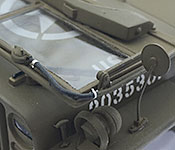 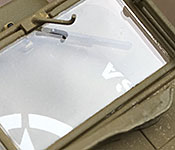 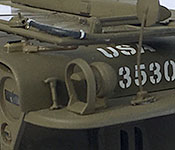 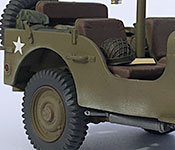 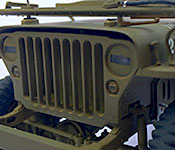 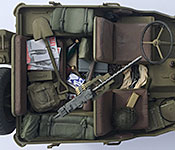 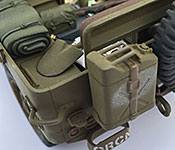 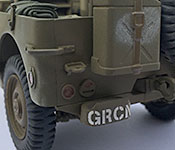 This started out as the most basic of projects, something I brought along with me when I was away from the bench because I could do much of the work with very limited tools. Knives, glue, sanding sticks, and a couple of clips were all I needed; paint could be done in one shot, and I had decals and a spare Browning .30 ready to add to it. But things kind of took a turn when I re-watched the movie to confirm the locations of the markings, and noticed that the Jeep Clint Eastwood drove only had a star on one rear fender. It was a typical Hollywood flub, something I've corrected for several times previously. But this time I thought of another possibility: what if the incorrect details were part of this particular Jeep's character? Despite his demotion from lieutenant, Kelly still moved with a great deal more freedom and respect than a typical private, including access to supplies. So my new idea was that this Jeep was itself a bit of scrounged materiel, found damaged or abandoned and patched up just enough for Kelly to use as his own personal vehicle/mobile trading post.

Most of the kit still ended up going together box stock, and I was very pleased with the quality of Italeri's work. There was very little flash and generally everything fit together properly. The only problem I ran in to was the way the front fenders went together. There were not real locators to indicate placement or angle, and following the order of operations put forth in the instructions caused a problem once it was time to put the front end together the rest of the way. Better to do things a little out of order and put the grille and fenders together at the same time, which would allow for better alignment...something I'll have to keep in mind for next time. There were also some ugly ejector pin marks on the chassis and backs of the seats that needed to be cleaned up, but nothing over textured areas so it wasn't too bad.

In addition to what came in the box, I also included a few other details to better match Kelly's Jeep. The windshield rails, gun scabbard, .30cal, and gun mount all came from Hasegawa's 1/24 MB kit. The blackout lights were made from wiggle eyes cut to size and masked before painting. Most everything was painted Model Master Olive Drab with the engine and transmission painted gray (the first "out of place" item, Ford painted their engines gray while Willys painted them green). The exhaust was painted various metals, and the seat cushions were painted brown. I used a set of custom decals I drew up in Illustrator, and shot the whole thing with Dullcote. Weathering was then done with a combination of paint, chalks, graphite, and Tamiya's weathering sets.

With paint done, it was time for detailing. I started by doing the same trick here as I did with the Batman Batmobile: the barrel of the Browning was replaced with parts from Master, and an ammo belt from Live Resin was added to the side of the gun. The 1/32 scale .50cal parts were near perfect for 1/24 .30cal parts, all I needed to do was add a little heat to the belt so it draped realistically. I reattached the top of the gun mount at 90° to the mount tube as per the movie's design, and glued both the elevation and swivel so that the ammo belt hung at the right angle. The movie Jeep had only one mechanical wiper, so I installed the left motor and made a vacuum line out of wire with metal tape clamps. The right wiper received a scratch built crank. Lastly, the mirror was modified with a piece of wire so that it could be mounted on the fender instead of the cowl.

For the inside, I wanted to load it with as much stuff as possible while still keeping the look of the movie Jeep (i.e., no huge piles of stuff or things wrapped around the bumpers). The two lighter colored satchels and green ammo box are from the same Hasegawa kit that donated the other parts, while the smaller satchels and various rolls are from a Custom Dioramics Universal Vehicle Stowage set. I kept the kit's shovel, but removed the mount tabs and scuffed the blade a bit before tossing it in the back. The resin parts were all painted the same color at the same time, but weathering was used to give them some variety. The liquor bottles came from what became the 2012 limo, and the German box was left over from my Last Crusade motorcycle. The M1 Garand and radio were modified from parts in MPC's WWII Jeep, with the radio handset coming from AMT's '65 Riviera. Tools were a combination of scratchbuilt and Fujimi garage items. The chain and rope were craft items, with the rope dipped in thinned white glue to give it the right heft and the chain dipped in blacken-it to give it a used look. I was still a little short on supplies, so I made up some vintage-correct cigarette packs, K rations, and Life magazines (available for purchase here). The final touch was the gold bar, which was carved from a section of rectangular plastic stock and painted gold. Kelly carried it around in a satchel, but I wanted to have more visible so I took a spare helmet from Hasegawa's Jeep, added a camo net made from wire mesh, and set that on top of the bar.