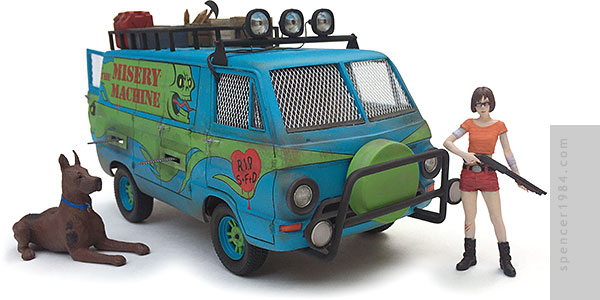 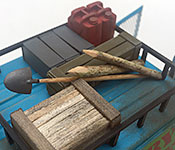 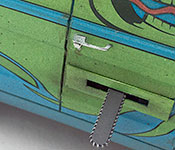 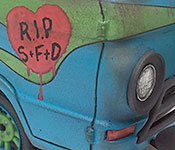 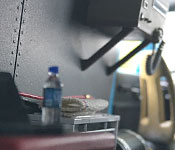 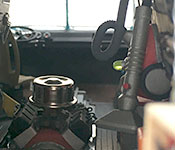 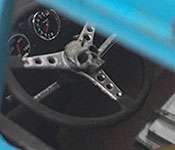 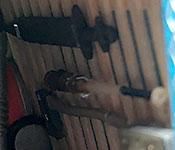 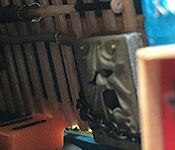 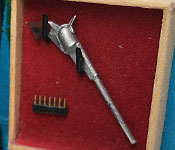 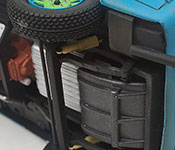 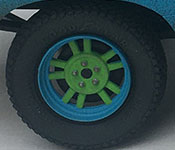 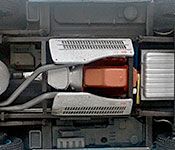 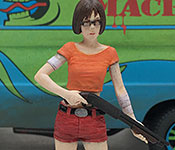 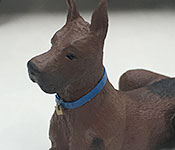 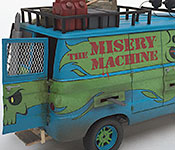 There have been a lot of "dark" takes on the Scooby Gang, but one of my favorites is Travis Pitts' We've Got Some Work to do Now. Featuring older versions of Velma and Scooby Doo with a highly modified A-100 "Misery Machine," it was a great piece that I wanted to homage in scale.

The base kit was a gluebomb Little Red Wagon I bought off of eBay. It wasn't complete and had been partially converted to the wheelstander, but that all worked just fine for what I wanted. I also used Jimmy Flintstone's Dodge A-100 Panel Van body, which was a pretty clean casting that only needed some basic cleanup around the windows before it was ready to go.

Starting with the engine, I removed the heads and valve covers, cleaned them up, and reassembled everything a little neater than the previous owner. The intake manifold and fuel injectors were too badly damaged to reuse, so I pulled a standard intake manifold and 4bbl carb from my parts box. The air cleaner is a rod cap I got from the hardware store, and the generator and oil filter are a scratch built parts. I finished it with basic wiring and plumbing, then mounted it back in the midship engine cradle.

The chassis wasn't quite as heavily gluebombed as the engine, but i did still need to pop apart the suspension and reset it so the parts were correctly aligned. Once that was done, I added parts box brakes, moved the gas tank up behind the front axle for better protection, and scratch built the shocks, brake lines, and various armor plates. I also wanted to start making this look the part of a not-too-distant future vehicle, so I added some miscellaneous tech details from Kotobukiya. I couldn't find any wheels that matched the art, so I drew up a set and had them 3D printed at Shapeways. The final detail was a pair of scratch built exhaust pipes that ran to the back of the vehicle and up to become part of a set of stacks.

There were basically no details of the interior provided in Pitts' art, so I was free to go nuts with whatever seemed like a good idea. There are a few nods towards the van having to serve as living accommodations, including a heater from Fujimi's Tools 3 kit, food supplies, and hooks in the ceiling for a hammock. I also included some armor plating and insulation to keep it occupants safe, as well as a Fujimi tool box and Garage supplies to suggest how the van stays in working order. But the bulk of the interior space was given to its job as a monster hunter.

Up front is a Fury Road-inspired steering wheel (made from a parts box wheel and Warhammer part), complete gauge cluster, and swivel seat for easy movement. The left side of the van has scratch built parts for the power unit, electronics, and battery box. The right side has dual mounted chainsaws (made from scrap toy parts with 3D printed blades), a CCTV monitor, and the handheld weapon rack.

Rather than a generic set of weapons, I thought it would be fun for Velma to have assembled her armory from across the pop culture spectrum. To wit, there is a Poltergust 5000 from Luigi's Mansion, the sword of legend (historically referred to as Excalibur, Joyeuse, or any number of other names), Lucille from The Walking Dead, the axe from Abraham Lincoln: Vampire Hunter, the Necronomicon (bound in iron), the Colt from Supernatural, and a towel as recommended by The Hitchhiker's Guide to the Galaxy. Most of these were scratch built or heavily modified, save for the axe which came from MPC's WWII Jeep. The Poltergust was taken from a K'Nex Luigi figure and given a proper light and better hose before getting some extra paint and weathering detail. The Necronomicon front cover was another Warhammer part, thinned down and assembled into the rest of the book. I didn't want all this work to be completely hidden, so I cut open the van's right rear door.

A few other effects were scattered about the interior, such as a laptop taken from Revell's Ford Excursion, various aftermarket tarps and bedrolls, and an Asuka water bottle with a custom label.

The roof rack was also scratch built, and filled with stuff to match the art. The gas cans were taken from Fujimi's Tools set, the ammo cans were modified from some circuit board parts, and the shovel head was taken from the same kit that provided Abe's axe. The shovel's handle, stakes, and wooden crate were all scratch built. The light bar was also scratch built, with lights taken from a 1/18 scale Chevelle diecast. To access the roof, I modified a section of Plastruct ladder to fit the corner of the van. Up front, the spare tire cover and driving lights are from my parts box, mounted on a scratch built bumper guard.

The van was given a base color of Model Master AMC Big Bad Blue, which both looked and sounded appropriate. The graphics are all custom made, using a combination of multi-layer decals and paint to get the finished look. Heavy weathering across the model was done using Tamiya weathering kits, AK Interactive and Vallejo paints, and various chalks, charcoals, and pastels.

The final touch was the figures. I normally don't include figures with my builds, but Velma and Scoob featured so prominently that I felt it was important to at least try to get them. Velma was originally an Atelier iT "Shotgun and Boxer" figure, painted in Velma's traditional colors and given scratch built glasses. Scooby was a vinyl figure, not listed as 1/24 scale but so close it looked just about perfect. He was repainted and given a scratch built collar and tag.