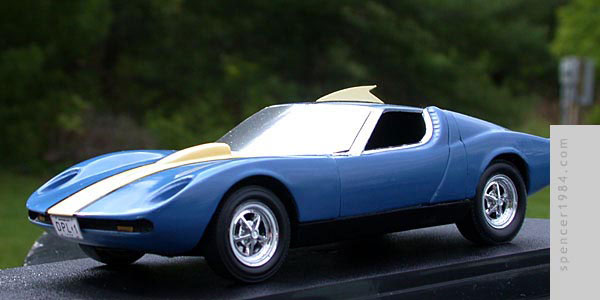 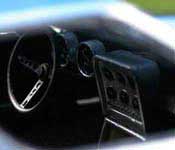 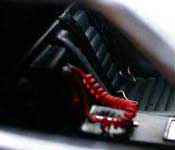 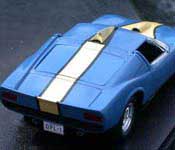 Cool Fact
Though Batman reveals that he chose this car for its subtlety, it wouldn't be until 1972 that he actually uses a stock-looking vehicle to blend in with the other cars on the road.

Though far from the most recognized Batmobile, this car marked Batman's return to more serious roots after the over-the-top campiness of the earlier TV series and comics. The switch came in December 1969, with Robin leaving for college and the Bat Cave being closed down in favor of a new headquarters in the city itself. Batman also replaced the Batmobile, citing the previous model as "too easily spotted."

The base car used in the comics varied from panel to panel, but its overall shape was that of a European sports car. I started with a die cast Lamborghini Miura because the shape of the body was nearly perfect, though it did require quite a few modifications to match the comic prototype. The particular model I started with had some pretty rough casting flaws, so my first step after the original paint was stripped was to clean up the panel lines and window openings. I then filled in the hood vents and tunneled the headlights with plastic tubing. The lower front and rear fascias were originally part of the model's base, so I cut those off and molded them into the body. I also discarded the rear window louvers and scratchbuilt a new panel to fill in the window opening. The hood scoop was originally a cockpit canopy from a 1/100 scale F-15, cut & shaped to fit the hood. Finally, the fin on the roof was scratchbuilt using sheet styrene.

Inside, I added the telephone & TV monitor, and replaced the heavy steering wheel with a more appropriate part from a 69 Mustang kit. The rest of the interior was detailed with painted gauges, seat belts, and a carpeted floor.

The body was detailed with Bare Metal Foil, black pinstriping tape, and a set of parts box wheels & tires replacing the hollow backed hard plastic originals. The windshield presented me with a unique challenge, since the Batmobile was described in the comics as having one-way mirrored glass. The solution came from a roll of automotive window tint. Specifically, the kind that fades from silver to black (I wanted the whole windshield to be silver faced, but considering the relatively small area I had to cover I didn't even get close to the dark area of the tint). It would not conform to the curve of original windshield, but I was able to laminate it to a piece of clear plastic and cut a new windshield. The end result looks exactly like what I wanted: it's impossible to see into the car, but looking through the side windows shows that the panel is still translucent, just tinted.