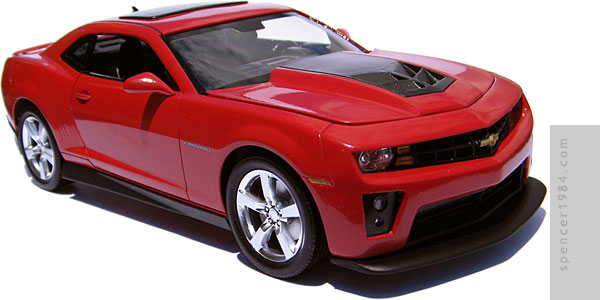 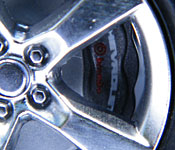 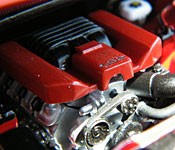 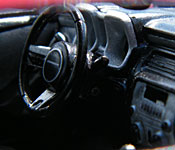 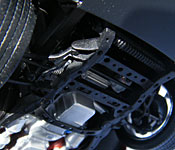 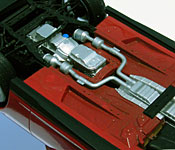 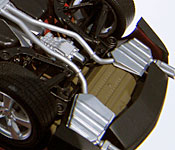 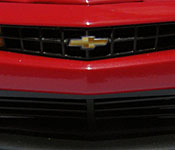 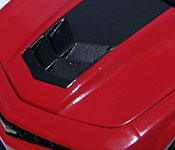 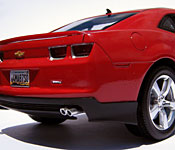 Chevrolet really seems to like putting fake Camaros in movies. It started with Bumblebee in Transformers, which was a fiberglass shell over a Pontiac GTO. Then, in Revenge of the Fallen, 'Bee appeared with an upgraded Z/28 package that never actually came to fruition. In the latest Fauxmaro adventure, an SS is wearing ZL1 clothes for Schwarzenegger's The Last Stand. I decided to do a similar conversion, starting with Revell's Camaro SS kit.

I did an essentially box stock build of the chassis and interior. The only additions I made were the quad tailpipes, seat belts, and buckles: everything else was detailed but box stock. I was particularly impressed with the job Revell did on the suspension subassemblies. With just a little cleanup, they looked fantastic and had no fit issues whatsoever.

The engine was my first venture into customizing this kit. I built the bottom half, then scratchbuilt a supercharger and beauty panel based on photos of the 1:1's engine. The drive pulley for the blower was from my parts box, and the intake was modified from the original part.

For the body, I started by removing the area under the grille, flattening the air dam, and reshaping the driving light coves. I then filled in the roof recess and cut a hole for the sunroof, raised the hood bulge, cut open the vents, and scribed the break line between the carbon fiber panel and the main hood. The shark fin antenna, light coves, and lower grille were scratchbuilt from styrene, and the upper grille was opened up for better realism. Finally, I modified the ground effects by making an all-new splitter, cutting down the side skirts, and reshaping the rear to more closely match the ZL1.

As with my Judge Parker Corvette, I used a current GM touch-up paint to get the color as accurate as possible (Victory Red in this case). Scale Auto's December 2012 issue proved helpful for detailing the chassis with the appropriate overspray, base coat, and detail paining. The interior was done in several different sheens of black to reflect the different textures, and the engine and running gear used a variety of metal colors including silver, steel, stainless, and aluminum. The hood panel was finished using the carbon fiber twill weave from Scale Motorsport, which was an excellent product but frustrating nonetheless thanks to the myriad angles and facets around the heat extractor. As usual, a screen-accurate license plate finished things off.