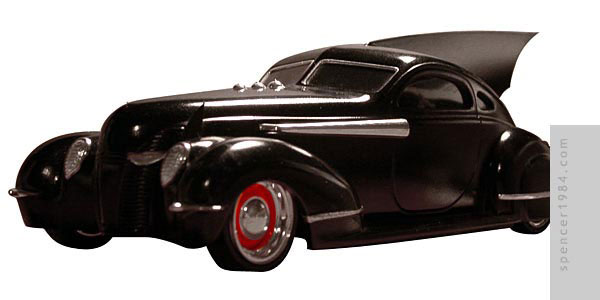 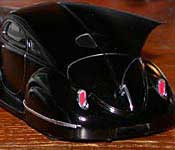 This model is based very loosely on the original Batmobile of the 1940s. The first Batmobile was a two door sedan with a bat head shaped mask on the nose of the car, and a large fin on the roof. When AMT released this kit, I knew it would make an excellent retro-Batmobile. (As it turns out, I wasn't the only one. I have seen several Black Force Batmobiles since then).

The modifications to the kit were relatively easy. I carved eyes from the grill before I installed it, and painted the panel behind the openings silver. I added the bat ears and fin using sheet styrene, and painted the whole car semi gloss black. I assembled the rest of the car as per instructions, adding chrome trim to the windshield frame and fender spears with bare metal. The result is a mean looking phantom Batmobile with little hassle.

This concept went on to become my first attempt at selling a model, when I built a similar model to sell as a charity auction on eBay.