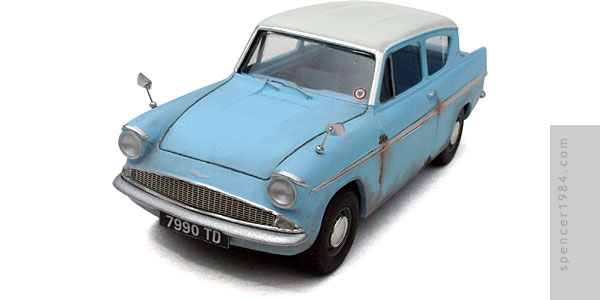 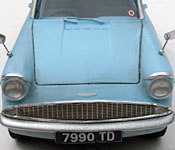 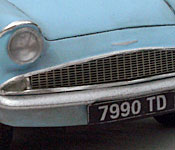 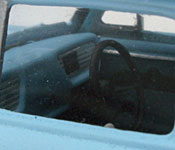 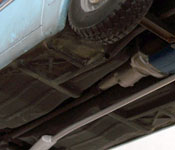 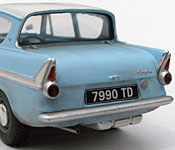 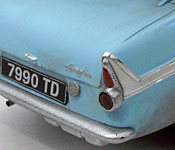 Cool Fact
J. K. Rowling said in 1999 that the Anglia was supposed to reappear in a future book, but eventually discarded the idea.

This was a fun build, but unfortnately by the time I got around to ordering this kit from the good folks at Air-Trax the mold was near the end of its usable life. This meant that the model had quite a few rough patches, but this actually worked out well for me since it saved me some effort in distressing the Anglia.

The biggest victim of the mold wear was the chassis, which was missing a good sized chunk of the floorboards and had a great deal of flash that needed to be cleaned off. The former was fixed with styrene, superglue, and baking soda, while the latter was addressed with some aggressive sanding. I made the front suspension, driveshaft, leaf springs, and fuel tank from raw styrene, and the exhaust system from brass and aluminum tubing (Air-Trax recommends a donor kit for these parts, but I thought I'd take the opportunity to do some scratchbuilding). The rear end and engine were used from a 1/32 full-sized Ford gluebomb I had in my parts box, which fit the much smaller Anglia perfectly. The tires were also pretty heavily flashed, so I replaced them with a set from a 1/43 vehicle I found at Rite-Aid. The wheels and hubcaps are stock, painted Krylon Smoke Gray and finished with BMF.

The seats and dashboard had a number of pinholes that had to be repaired, but nothing too bad. Once that was done, I painted the seats and door panels Krylon Bahama Sea, flocked the floor, and painted the remaining details black or body color. I also swapped the dashboard to right-hand drive by making filler panels for each side, then adding the new gauge cluster and steering wheel.

I cleaned the body of all excess flash, and filled in most of the pinholes (leaving a few where they would be appropriate to simulate rust holes). I used the "salt" technique to make the rust patches along the doors and rockers, and painted the body Rustoleum flat white and light blue. I like using Rustoleum for projects like this because in my experience it has the lowest risk of reacting badly to resin and dries rock hard. Unfortunately, this hard shell also means more effort is needed to get the salt off later. I also realized too late that the Weasley's car was a 105E Deluxe, and so it should have only had the upper trim strip - the model represents a 105E Supreme, with trim molded both above and below the white panel.

I finished the assembly work with a set of windows made from transparency film, scratchbuilt mirrors, parts box headlights and tallights, and a PE grille made from an HO train car walkway. A set of screen-accurate license plates, a parts box windshield decal, and liberal application of weathering finished things off nicely.