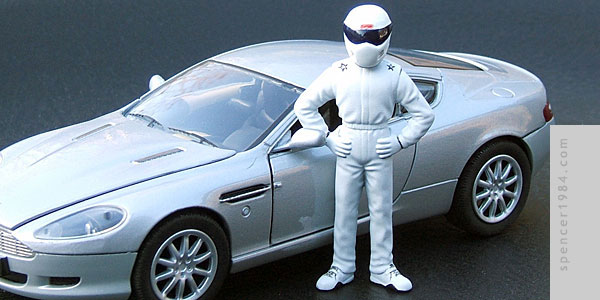 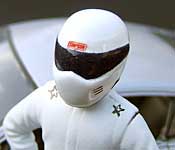 In 2003, Motorworks released a series of NASCAR drivers that were all based on one of three generic figures: a "V for victory" pose with both hands raised, a "waving/fist pumping" pose, or a more serious "hands on hips" pose. I thought this last one would serve as a great base for a custom Stig figure, as it's the same pose seen on Stig's banner in the Top Gear studio. I ended up using a Ryan Newman figure, though there were other drivers that used this pose as well.

The proportions are not bad, but not exactly perfect either. Still, it only required a little reworking to make a decent Stig. The helmet is the biggest change: I removed the NASCAR-specific vents, and re-sculpted the visor and muzzle using styrene and filler (The Stig has used a couple of different helmet styles over the years...I chose a design used in 2006, as it is my personal favorite). I also made a few light corrections to the body, and then painted it with Tamiya White Primer. The helmet was painted using Model Master Gloss White and Testor's Dark Blue, and the various seams and markings were freehanded in black. The only bit of color on Stig's uniform - the Simpson logo on the helmet - came from a decal sheet from a dragster kit.