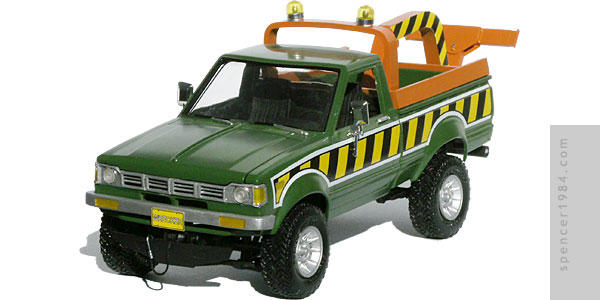 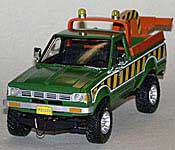 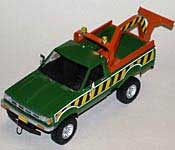 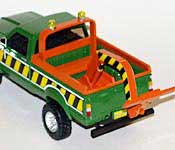 Hoist was modified from the same base model as Trailbreaker, but the end result is a bit better thanks to the experience I gained between the two models. Like Trailbreaker, my first job was to reshape the body. I modified the tailgate, roof pillars, hood, cowl, doors, and grill to match the prototype. The grill/headlight unit and bumpers were scratch built from styrene stock.

The tow rig was a project in itself. The toy did a pretty good job of capturing its 1:1 counterpart, but several features had to be simplified or altered because of the way Hoist transforms. I researched what an actual era- and location-accurate tow boom should look like, and drew up a set of plans that combined the 1:1 design with the toy's design. The entire tow rig was scratch built from styrene stock, with lights taken from the parts box. Although the American toy and cartoon series both kept the wings on top of the light bar in truck mode, I opted to leave them off in favor of the original Diaclone's design.

Hoist is finished in Krylon green and orange, and has a set of custom-made decals for the sides of the truck and tow boom.