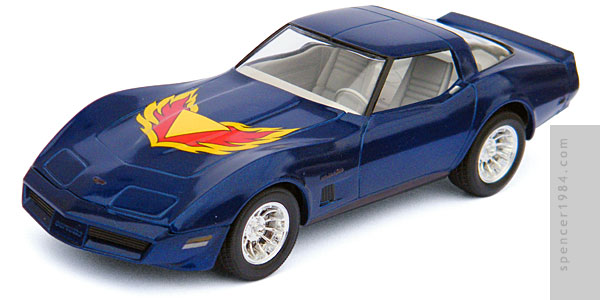 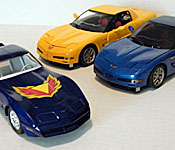 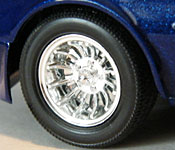 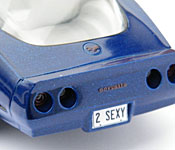 Cool Fact
When Tracks was announced as an upcoming Alternator, his color scheme was set to be yellow like the Binaltech release. However, casting the figure in yellow plastic proved to look terrible, and he was instead cast in blue. Takara followed up their Binaltech release with a second run of the figure in blue.

This is pretty much a simple repaint of an old promo. Like a few other Transformers-themed models, this was actually a redo of a previous build. Unlike those, though, this redo wasn't to make it more toy accurate—I was actually pretty close the first time around. But it lacked a certain flair that I felt the character needed.

First, he got a color upgrade. Instead of the Testors Bright Blue I used previously, I went with Model Master De Ja Blue which was a little deeper and had a subtle metalflake finish. I also did the hood graphic a little differently, using two shades of yellow with the red flames, then layering them over a white field cut tight to the edge of the flames. I left out the Autobot symbol within the triangle in an effort to retain the "robots in disguise" aspect.

The interior was painted white as before, but over a basecoat of silver so it had a cooler tint. I also did the chassis in a simple flat black again.

Two final details finished him off: a wheel swap with Monogram's '56 Chevy to recreate Tracks' 12-spoke turbines, and a Reprolabels-inspired "2 SEXY" license plate.